A breakdown and recap of the announcement for the 2021 CrossFit Open 21.2 workout, billed as Youth vs Experience 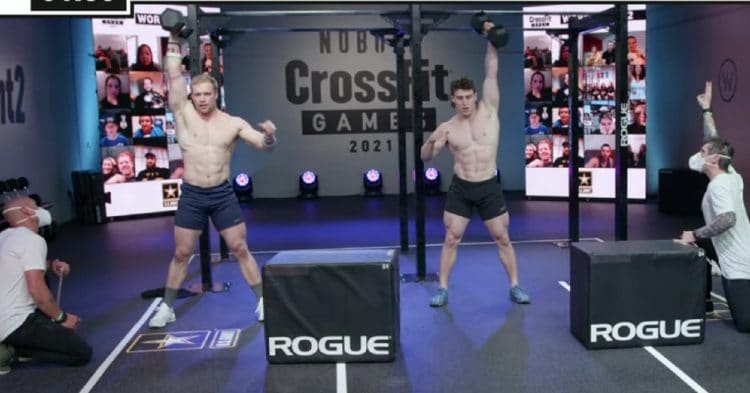 The 2021 CrossFit Open continues to roll on, with the announcement of the 21.2 workout. This is a recap of the announcement, including the workout details and results of the head-to-head competition between Samuel Kwant and Justin Medeiros.

The 2021 Games seasons has brought with it a ton of changes, and the Open has been no exception. With the complications of the global pandemic, special care was taken to ensure the Open could be completed at home.

In addition to that, this year’s CrossFit Open features only three events, rather than the typical five. The first of these kicked off on March 11th, and the second part begins one week later, with the workout announcement tonight.

Posting to YouTube and Facebook, the folks at CrossFit revealed the workouts for the second portion of the Open, broadcast from the CrossFit Home Office in Scotts Valley, CA. Below is that workout, and a recap of the announcement.

Use PVC pipe or a stick to complete hang squat snatches

Aside from the workout announcement, fans and athletes alike got to see the 21.2 workout in action. In a matchup billed as “Youth vs Experience,” Games veterans Samuel Kwant and Justin Medeiros competed against each other, completing the workout.

It was all Medeiros when it came down to this workout, which was a repeat of the 17.1. He set a hard pace from the start, narrowly missing the 10-minute mark, but besting his previous best of 11:53. It was also noted that Justin was just four seconds shy of the world record for the workout.

The live stream also included representatives from the US Army, who was hosting the workout announcement. These two veterans also competed against each other to complete the workout.

Athletes will have until the end of next week to complete the CrossFit Open 21.2 workout, and submit their results. From here, their hope is to be able to qualify for the 2021 NOBULL CrossFit Games.