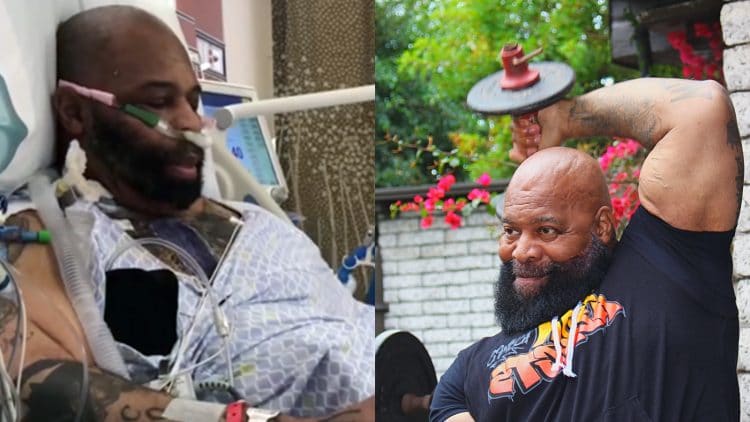 We are all so caught up in pursuit of material things that we seldom admire the hereditary gift of a healthy body and care for it. More often than not, it is our own abuse that leads to health complications that make us realize its value. Multi-faceted personality and powerlifting legend CT Fletcher is one person that inherited a heart condition that has severely impacted his life and put him on the verge of losing it all on more than one occasion.

Fletcher’s heart had taken a severe hit and he was disabled at 42 years of age in 2001. He underwent life-saving open-heart surgery in 2005 and underwent a heart transplant surgery in May 2018 after almost one year of waiting since suffering a massive heart attack in mid-2017.

A multi-part documentary series ‘Last Will & Testament’ directed by Corrado Caretto, captures the essence of CT Fletcher’s hard-fought battle to survive the biggest health scare of his life. In this throwback post, we revisit the documentary posted on CT Fletcher’s YouTube channel.

CT Fletcher shares the gut-wrenching details of his heart condition

After suffering a heart attack in 2017, CT Fletcher was told he would need a new heart to survive and was on a waiting list hoping to receive a new heart. However, In January 2018, his heart stopped working but the pacemakers and defibrillators brought it back to life. At the beginning of the video, CT Fletcher recalled the moment he suffered a heart attack.

“Watching my youngest son Samson sit there right next to me, he looked me in the eyeballs and he told me, “Daddy, you’re not gonna die!” With tears rolling down my face, I looked back at him and said, “I’m sorry to disappoint you son.” I felt it. I was a dead man,” CT Fletcher said.

Fletcher further stated that he was immediately taken to the emergency room. To his disbelief, the doctors told him that a heart transplant was the only way to save him. Having challenged the limits for his entire life, Fletcher could not come to terms with the fact that everything he worked towards his entire life was on the verge of slipping away as his heart was functioning at 20 to 25 percent of its capacity.

“From a child up for as long as I can remember – strength! Strength was everything to me and to have it taken just like that; frailty, weakness, everything you fought against so hard your entire life NOW is your life!”

As a multiple-time world champion powerlifter, CT Fletcher had never felt the pain of being dependent on someone. Needless to say, depending on his family for simple everyday chores like taking a shower or changing clothes weighed heavily on the proud powerlifter.

“I have to call my son in the bathroom to help daddy turn the water off! I have to have help! My weakness EXPOSED, my frailty EXPOSED! My humanness EXPOSED! It is hard, it is f* REALLY HARD,” said an overwhelmed CT Fletcher, pain reflecting in his voice.

When a chronic health condition starts pulling an individual down, it severely affects their ability to live a normal life, let alone allowing them to do the things they love. Unfortunately, CT Fletcher has found himself in that situation. As tears started rolling down his eyes with grief, CT Fletcher continued:

“Earlier this year, I could do a hundred push-ups like it wasn’t sh*t. The other day, I got down on the carpet and I laid there… I tried to push myself up one time, just one time. I tried over and over again… for one push-up, I couldn’t push myself up.”

“I’m a Superman… Indestructible! I can will myself to do anything, I couldn’t get up off the carpet. I had to ask my son to come and help me get off the floor. That’s hard!”

CT Fletcher opened up and shared the harrowing situation with the world, not for sympathy but to motivate those who are struggling to achieve their dreams in life.

“No, it’s not much left. Just about everything’s gone but I’m still CT Fletcher. I refuse to believe that I can’t do one push-up. I’m not expecting to receive a new heart and just go right back killing it in the gym.”

The battle to make it to the transplant list

A successful heart transplant gives a patient a second chance at life. However, the extensive heart transplant waitlist gets a new entry every ten minutes in the United States. The documentary revealed that 20 people lose their lives every day waiting to get a heart transplant! CT Fletcher’s doctors told him that he would have to be in good health even to make it to the heart transplant list. This conversation changed the course of further action. Fletcher looked at this as an opportunity to encourage people by handling this situation in the best possible way.

“The importance of being able to do that one push-up took on a whole new meaning.”

“If I lose this fight then this is my last will and testament. The last thing that people will be able to look at after I’m gone and say how did he handle the possibility of death. That’s more important… how did he handle the possibility of dying because there’s going to be so many people out there who’s gonna be faced with the same thing. If they look at how I handled it, I want them to be encouraged and to be helped,” CT Fletcher continued.

In January of 2018, CT Fletcher attended the Iron Wars powerlifting event and kept all the media obligations in spite of his chronic heart condition. Fletcher did not disappoint those who were inspired by him. However, the intense experience came at the cost of his health. A few weeks later, Fletcher’s heart stopped working and was brought back to life with defibrillators and pacemakers.

Back from the clutches of death

CT Fletcher was taking heart medications in hope of getting on the heart transplant list. However, the medicines had taken a serious toll on his kidneys, and his hope to get on a heart transplant list was dimming. His heart stopped functioning again in February 2018 and Fletcher knew he did not have too many battles left in him. Only a miracle could save him. The darkest hour of the night comes right before dawn this episode was like that darkest hour. On May 5th, 2018, the doctors contacted CT Fletcher and told him they had found him a heart.

“We complain a lot about what we don’t have but sometimes we need to just take a minute and thank god for what we do have,” CT Fletcher said before being taken to the operation theater.

The next day, CT Fletcher received a new heart after an 11-hour long surgery and made a quick recovery in the weeks that followed. A year later, Fletcher got back into his element and found the Superman from Compton inside him. Like the documentary title suggested, his life is standing on the foundation of will and unshakable faith… Something we can all take away from Superman from Compton’s struggle.

Courtesy of CT Fletcher’s YouTube channel, you can watch the full video here: