Bodybuilding great Phil Heath looks to have packed on some muscle recently. 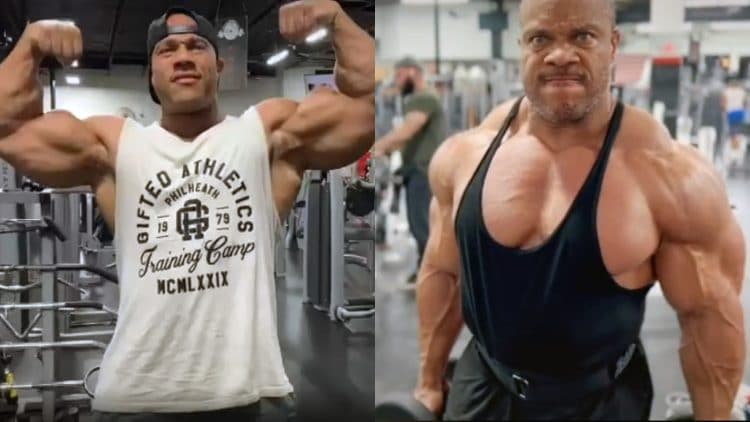 Bodybuilder Phil Heath is not one to rest on his laurels, especially when it comes to staying in shape. Heath recently shared a workout video on his YouTube channel and “The Gift” appears to have packed on noticeable muscle mass.

Phil Heath and bodybuilding are inseparable terms at this point. The bodybuilder has acquired a total of seven Mr. Olympia titles. A feat that has only been accomplished by Ronnie Coleman and Lee Haney. However, what makes Heath so special is the fact that he won all of those titles in a consecutive manner (2011, 2012, 2013, 2014, 2015, 2016, and 2017).

In 2018, Heath followed up his jaw-dropping dynasty with a second-place finish at Mr. Olympia. It was the late Shawn Rhoden who managed to dethrone Heath after a seven-year run at the top. In 2020, the bodybuilding legend made the podium once again but this time he came up short in third place. Nevertheless, Heath is still a pervasive threat to athletes anytime he enters a bodybuilding competition.

The legendary bodybuilder certainly looks like he’s taking his training seriously. After sharing a workout on his Instagram page, Phil Heath’s physique looks to be increasing in size compared to a short while ago.

“Do the work!!!! 💪🏽
Before you ask- Yes! This was taken tonight at the gym.
Full YouTube video up tomorrow on PhilHeathTv
Staying on top of my meals with @flexpromeals 💪🏽 up to 6 meals a day!
Feeling amazing after just 1 month of my HRT and Peptide protocol thanks to my @transcendhrt family for getting me right🙏🏽 Get your blood work checked everyone! We answer quickly and we’re here to help!
links are in my bio 💪🏽
Much love -7XMRO” Phil Heath shared.

As of late, Heath opted not to compete in the 2021 Mr. Olympia show and did not cite the exact reasons as to why he didn’t make an appearance. The bodybuilding star revealed that he contracted Covid-19 late last year and was hospitalized. While the virus can affect everyone differently, Heath shared that he lost a significant amount of weight and muscle while grappling with the stubborn pathogen.

In addition to Heath, bodybuilding legend Flex Wheeler and Cedric McMillan also contracted the virus. The pair have since made a recovery from the illness. In fact, Flex Wheeler admits that he believes he contracted the virus at the 2021 Arnold Classic UK. On the other hand, McMillan details his Covid journey, and the bodybuilder states that he suffered a near-death experience while contending with the illness.

Phil Heath’s offseason weight generally hovered around the 270lb range but mentioned that after Covid, his weight dropped to 225lbs. The bodybuilder attests that he only remembers being that light back in 2007 or 2008. Though, after his recent social media share, his physique looks to be rebounding nicely after last year.

Despite his storied career as a bodybuilder, it’s unclear if Heath intends to make waves at the Mr. Olympia event scheduled for Dec. Given that he has added some bulk to his frame, Phil Heath looks absolutely ripped in his latest YouTube workout video.