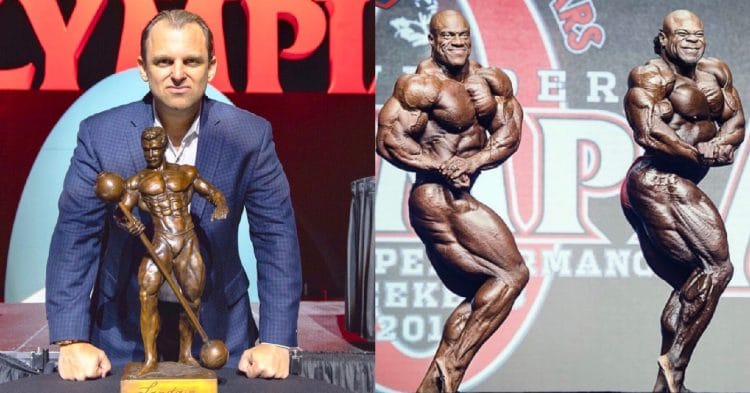 Fans have been wondering if Kai Greene and Phil Heath will be competing at the 2020 Mr. Olympia. Now Olympia President Dan Solomon addresses these questions, and provides updates on what people can expect.

Solomon has been quite a busy man as of late, trying to do his best to keep everything on track for the Olympia, even during this global health crisis. He did the best he could to keep things moving according to plan, but unfortunately was forced to make some big changes. Now the event will go down in December, at Planet Hollywood on the Las Vegas strip.

Now that those questions have been answered, fans have one other big question on their minds: will Kai Greene compete at the Olympia this year? After all, the fan favorite has been flirting with a comeback for several years now. Well, Dan Solomon was asked that very question when speaking in a recent interview, and his answer was not quite what you might expect.

“When it comes to what Kai is going to do tomorrow, next week, and of course we are talking about seven months from now, your guess is as good as mine. However, with that said, I take exception to some of this stuff, with regards to Kai. By the way, I’ll qualify this by saying I love Kai as a human being, I respect him as a bodybuilder, he is exceptional for our sport, and people respond to Kai in big ways, so Kai has my upmost respect.

“With that said Kai, I gotta be honest. I always think about the fans with everything that we do, and that’s always how I’ve operated. I take exception to any athlete who dangles the carrot that they are going to compete just for their own entertainment. I’ve got to be honest with you, I think it’s very disrespectful to the fans. I think it shows very little appreciation for the decisions that fans have to make when they’re deciding how they’re going to spend their money.

“I don’t really appreciate when an athlete plays games with the emotions of the fans. This has been going on for a long time, it’s been going on for years, and we continue to have to answer questions about whether Kai is or isn’t.

“Just be real with the fans. If you’re going to do it, then do it. It doesn’t always have to be a chess game, it doesn’t always have to be a read between the lines mindset. You’re either in or you’re not, I certainly would love to see Kai Greene in the Olympia. It would be tremendous, it would be exciting. Now he’s not qualified for the Olympia, so there’s things that would have to happen for him to get there, but I’m as big a Kai Greene fan as anybody.”

Dan Solomon continued to discuss that things are different moving forward with Kai, now that the AMI has sold the Olympia. He had some issues with the Olympia’s former owners, but now that things have changed, he feels those issues are in the past. However he mostly just wants to see Kai Greene make a decision one way or the other.

This is not the only person that fans have been wondering about. Bodybuilding legend Phil Heath has also toed the line between competing and not competing again. Dan explains that the rescheduled date for the Olympia prejudging happens to fall on Phil’s birthday and that he suggested to Phil that perhaps this would be a serendipitous time for a comeback.

“I did reach out to him, and reminded him what a great way that would be to celebrate his birthday with bodybuilding fans, at the biggest bodybuilding show in the world, we thought maybe that would be fun. Maybe it’s ominous, prophetic coincidence, I don’t know. But yes, the prejudging this year will take place on Phil Heath’s birthday. The question is: will Phil Heath be home in Colorado, eating birthday cake, or will he be on that stage trying to make history? That’s a decision Phil has to make.

“My intuition is that it’s a very real possibility. Phil’s wise enough to realize what’s at stake. He also understands that he does not want to look back and regret anything. That window is not permanent. He’s inside a window now where he could legitimately show up and match the Lee Haney, Ronnie Coleman record. This isn’t just a comeback for him, it’s about legacy.”

Dan Solomon went on to say that he realizes that Phil Heath is pursuing other things, but that those endeavors will be there when there is no more bodybuilding to do. Ultimately time will tell whether he or Kai Greene compete at 2020, Mr. Olympia. However, if it does happen, it will surely be a magnificent sight.

How Do I Calculate My TDEE Manually?

Eddie Hall Does 100 Sit-Ups A Day For 30 Days, And You Will Not Believe The Results!