Eddie Hall Does 100 Sit-Ups A Day For 30 Days, And You Will Not Believe The Results! 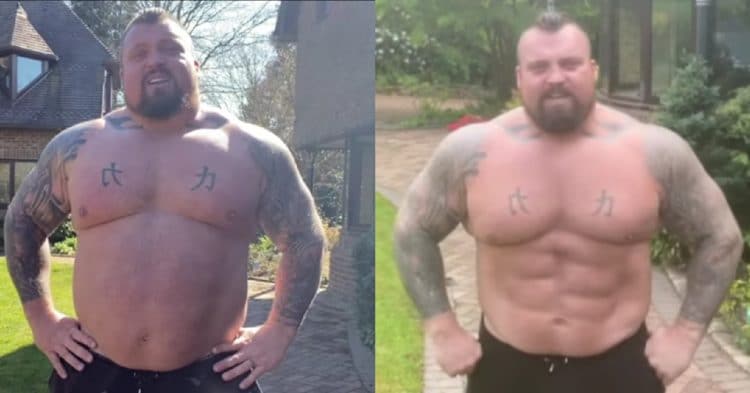 Eddie Hall is looking to box his rival and fellow strongman Hafthor Bjornsson. As part of his preparation for that bout, he decided to do a common fitness challenge, which yielded him some pretty impressive results.

It came as a massive shock to the strongman community when Hall revealed that he was willing to fight Bjornsson to settle their beef. It is not often that we get to see rivals from any sport take their feelings out by competing in a boxing ring. Since that announcement was made, we have seen all kinds of training footage from Thor, working his hands for the bout.

But Thor isn’t the only one who is training hard for this fight. Eddie Hall took his his YouTube channel recently, in order to give fans a sneak peak at the work he is doing. Although he is still over a year out from the bout, the training has already begun. The first step? Do 100 sit-ups a day for 30 days straight.

Sure, this may sound like your typical YouTuber fitness challenge, and in many respects it is. However Eddie did this challenge in order to strengthen his core, and lose some weight. So he started decreasing his calorie intake and strength training and doing these many sit-ups, documenting his progress along the way.

At the beginning of the challenge, Eddie explains that he weighs about 385lb. Moreover, he says that he wanted to do all 100 sit-ups in one session. However he was unable to do that, at first only managing about 40 reps in one sitting, so he would break it up into multiple sets.

By the end of the month, a noticeably leaner Hall was able to do around 75 sit-ups at once, saying that he felt far more energized. Not only that, but he managed to drop almost 20 pounds, weighing in at 366. This change was evident, as you could clearly see abs that were not as defined at the start of the month.

“I feel great for it,” he says. “I feel absolutely fantastic. All the excess fat’s gone, my abs have come out massively, so I’m really really really happy with the results. Obviously I’ve been doing a lot more cardio; cycling, swimming, doing a lot of boxing in my basement as well, and I’ve completely changed my training. I’ve stopped doing really heavy weights and started doing explosive movements,  so of course the muscle mass is going to decrease slightly. So the weight loss is going to be a bit of muscle mass as well.”

All in all, it seems that this workout challenge did wonders for Eddie Hall. He seems much trimmer now than he was at the start. It will be fascinating to see how he looks by the time the fight comes around.