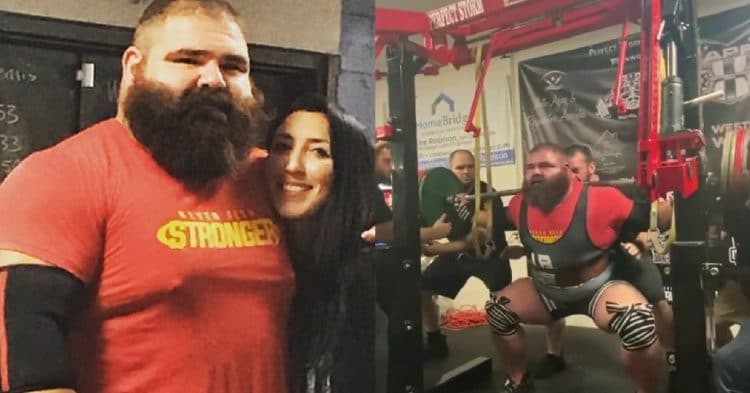 World record holding powerlifter Daniel Bell is no stranger to moving some absolutely incredible weight. This was seen again recently, when he attended a powerlifting meet over the weekend.

Make no mistake about it, 34-year old Bell is one of the most powerful men to ever walk the Earth. He proved this last year, when he put up the highest wrapped total in powerlifting history, at an insane 2518.7lb. He then followed this up with another incredible showing in March, with a 2485lb total, which was the most weight totalled in sleeved competition.

Now a few months later, Daniel Bell had another strong performance over the weekend, as he showed with a recent Instagram post. Competing at an APF meet hosted at his local gym, he managed to put together a solid showing, culminating in a 2,667lb total. This was made up of a strong 683lb bench and 881lb deadlift, but by far what caught our attention the most was his sensational 1102lb squat.

“My home gym @perfectstormhardcoregym had a amazing APF meet this weekend. Of course my first in “multi ply” squatted 1014 and 1102 in just briefs benched 683 in a single ply katana and then pulled 881 raw. I’m extremely happy with 2,667 total. And I’m extremely proud of all my teammates that competed and helped me through this process.”

Bell has actually been staying really busy this month, competing just a few weeks earlier. At the Pioneer Open, he was able to pull a sturdy 903lb, en route to his 2491lb total. However his 1003lb squat and 584lb bench were nothing, compared to what he would hit most recently.

It appears that Daniel Bell is really beginning to amp things up for the latter half of the year. Judging by the way he has been looking recently, it would not be at all surprising if he further extends his world record total before the end of 2020. Either way, he is always impressive to see compete.