Daniella Melo claimed her sixth National title and decorated it with an American bench press record. 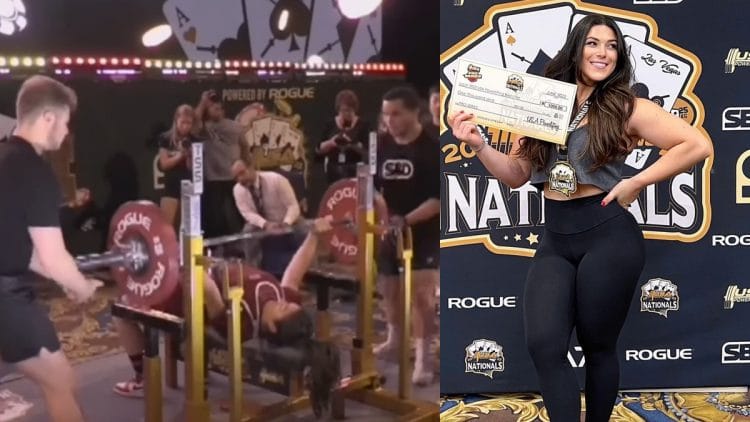 Daniella Melo has left her mark in powerlifting a long time ago, as she won the IPF World Championships and numerous other major competitions. She won the USAPL Nationals five times before, but the last time she took part in one of them was in 2018. However, that has now changed, as Daniella competed at the 2022 USAPL Mega Nationals, which took place from June 7-12, 2022, in Las Vegas, Nevada.

Daniella Melo weighed in at 87.96 kilograms (193.7 pounds) for this competition. She went 9/9 for her lifts, as all of her attempts were successful. Despite not putting up her greatest performance, Daniella still managed to win the competition with 15.5 kilograms (34.2 pounds) advantage over the second-place finisher.

*Daniella Melo has a higher squat competition PR of 230 kilograms (507 pounds), which she set at the 2019 IPF World Classic Powerlifting Championships.

*Daniella Melo has a higher deadlift competition PR of 246 kilograms (302 pounds), which she set at the 2019 IPF World Classic Powerlifting Championships

*Daniella Melo has a higher total competition PR of 613 kilograms (1,351.4 pounds), which she set at the 2019 IPF World Classic Powerlifting Championships.

You can watch all of Daniella Melo’s lifts here, Courtesy of GOOD LIFT! YouTube channel:

The 2022 USAPL Mega Nationals were Daniella Melo’s 15th sanctioned powerlifting competition. Daniella has an impressive win percentage, as she won 13 of her 15 powerlifting appearances. Those wins include some major competitions.

Daniella Melo has taken part in two sanctioned powerlifting competitions in the past two months, but has not competed professionally for three years before that. This could mean that one of the greatest powerlifters is back for good. If that is the case, Daniella will probably impress us with amazing feats of strength once again.

Following their expulsion from the International Powerlifting Federation (IPF) for refusing to comply with WADA, USA Powerlifting (USAPL) held the...

Going into the 2021 USA Powerlifting (USAPL) Nationals in Daytona, FL, Amanda Lawrence was the reigning national title holder and...