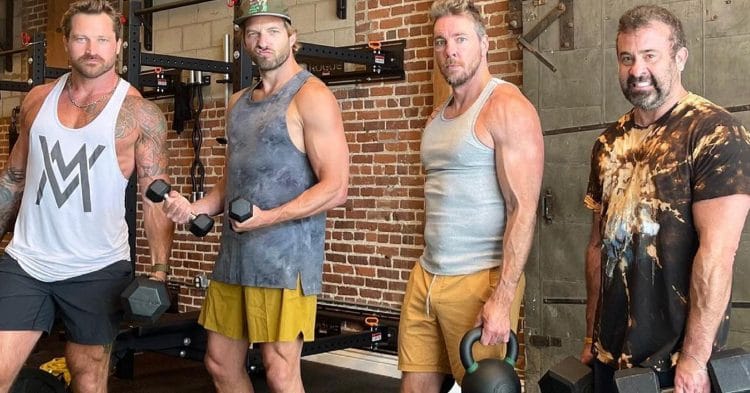 Well, well, well another Hollywood actor not known for being shredded, turns out he actually is shredded. This time, it’s the kinda famous actor with the even more famous wife(Kristen Bell)-Dax Shepard.

You may probably know him from his time on Punk’d where he would troll celebs before Ashton Kutcher would run out screaming and laughing before the celeb decided to punch Dax.  However, this time, Ashton Kutcher won’t be blowing up your dm’s ranting on how be Punk’d you into believing Dax Shepard got jacked.

For the most part of his career, Dax was everything but jacked.  He was always the tall awkward dude comic relief in the movies. Even last year, when signs of him being more muscular than the average person remembers him he didn’t look that much ridiculous.

This was from August of last year. As you can see, he’s got some size on him, but nothing special. No garden hose climbing his arm, and definitely not that much size as the recent picture that’s got the internet buzzing.  Now keep that picture in mind because we will be fast-forwarding now to April 1st of 2021, about 3 months back.

Holy crap! Is that the same guy? Is that Dax’s younger brother? Is he just trolling people because it was posted on “april fools” day? Well, according to the recent, father’s day-themed picture, this, literally, wasn’t even his final form.

Somebody better call a plumber because those pipes look like they’re about to burst! Seriously tho, mad props to Dax Shepard because this looks like the classic “stick to a workout plan, eat as clean as possible and as often as possible, and you’re set” approach.  Started working out to feel good or out of boredom when everything on the planet stopped working for a couple of months. Then came in the first gains, and then on he just continued to pile on, so good for him.

Brian Shaw Reacts To Second Place Finish At 2021 World’s Strongest Man: ‘It Was A Great Battle’

Wide lats, thick traps, and a railroad-like lumbar are desires of most lifters. The problem is that only a few...