Brian Shaw Reacts To Second Place Finish At 2021 World’s Strongest Man: ‘It Was A Great Battle’

After coming in second place at the 2021 World's Strongest Man, Brian Shaw shares his thoughts on the contest and his performance 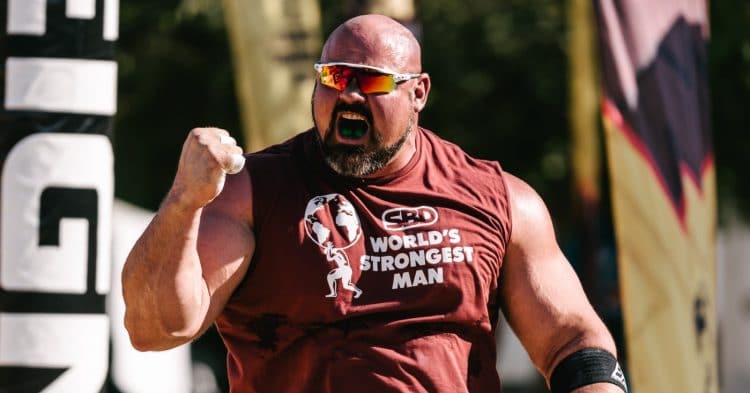 After a hard fought week of competition, Brian Shaw ended the 2021 World’s Strongest Man in the second place position. Following this performance, the four-time champ reacts to how things turned out, and gave his thoughts on the competition.

Shaw came into the 2021 WSM with a ton of questions and on the back of a lackluster performance in 2020. Some detractors even questioned if he would be able to make it to the Final, after coming 6th in 2019 and 5th in 2020.

He not only proved the doubters wrong by coming in a strong second place this year, but he even set a new world record in the process. It was an impressive showing that at one point had him just a single point behind Tom Stoltman, who wound up winning the contest.

Following the 2021 World’s Strongest Man, Brian Shaw posted to Instagram to share his thoughts on the contest. Here he thanked his fans, friends, and family for their support, while congratulating his fellow strongmen on their performances.

“World’s Strongest Man 2021 is a wrap. It was not the outcome I wanted and trained so hard for but it was a great battle. I want to congratulate @tomstoltmanofficial on his first WSM title and @max.boudreault23 on his first WSM podium finish.
–
It was a real honor to compete against all of the guys this year. We are all really brothers in strength and I have great respect for all of the other competitors,” Shaw wrote.
–
“Getting to have my wife @fitmommy_kerishaw and our boys at the contest this year was amazing and being able to finally pick my boys up on Father’s Day was a moment I won’t forget. My wife Keri is truly the unsung hero as I can’t explain how much she does for me so that I can go after my goals…I can’t thank her enough.
–
Thank you to @probodycoach for working with me to bring a different physical package to this years contest,” Shaw added. “I also want to thank @builtbymike for helping me with my programming leading up to WSM. I have always done my own programming and Mike listened to what my ideas were and came up with a great approach for the contest and was able to help me address weaknesses I had and make improvements.
–
I want to thank my team around me for all the hard work and sacrifices that they made to help me. I appreciate all of you more than you know.
–
And to the fans…all I can say is thank you! You all make me feel so loved and appreciated. It’s incredible to be able to put on a show for all of you and I love you guys!”

From the start of the 2021 World’s Strongest Man, it was clear that this was not the same Brian Shaw that showed up the two previous years. He absolutely crushed the competition in Group One of the Qualifying rounds, winning a spot in the Finals without needing to do the Atlas Stone-Off.

From there, he had some high moments, and some less than ideal performances. However the Finals was where we saw him score a new world record, breaking his previous best at the Keg Toss by launching a 15kg keg up 7.75 meters.

In the end, the massive lead that Tom Stoltman got early on was too much for Brian Shaw to overcome. However he proved without a shadow of a doubt that he is far from finished being competitive with the best strongman athletes in the world.