The decline push-up is one of the most effective bodyweight chest exercise variations that you can do. In this guide, we've explained how to do it with tips, variations, and details for how to include it in your training. 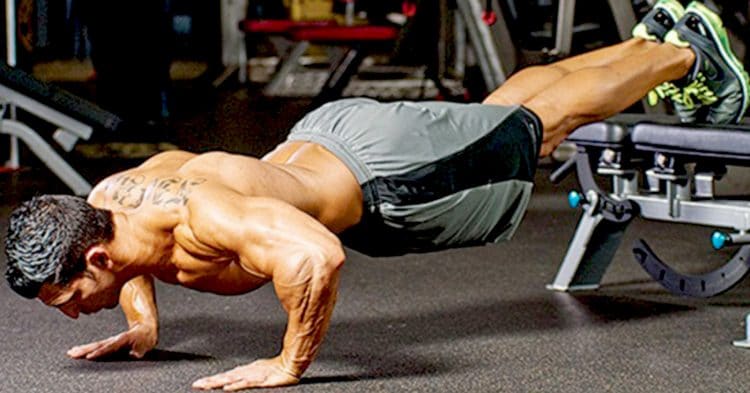 How To Do Decline Push Ups

The basic bodyweight push-up is a great exercise for building the chest, shoulders, and triceps. But there comes a point for a lot of us when it’s not as challenging anymore and the gains start slowing. That’s because there isn’t adequate stimulation or overload to force the muscles to adapt by getting bigger and stronger.

However, push-up variations such as the decline push-up is much more challenging and therefore will allow you to progress since you won’t be able to do as many repetitions.

Keep learning to learn how to do it with tips, variations, and helpful advice for incorporating it into your training regime.

The decline push-up as well as any push-up variation works several muscle groups at once since it’s a pushing exercise. Here are the details for each muscle involved.

This is the target muscle group of the decline push-up and although it cannot be isolated, elevating the feet allows us to place more of an emphasis on this muscle.

The sternal head is the lower portion of the chest. It causes extension of the flexed arm.

The deltoid anterior is one of the three muscles that make up the deltoid or shoulder muscles. It’s located on the front of the upper arm and with help from the other deltoid muscles, abducts the arm past 15 degrees.

It also works with the pectoralis major to flex the shoulder, helps to prevent inferior displacement of the glenohumeral joint during arm adduction (arm moves toward the midline of the body), and medially rotates the upper arm with help from other muscles.

The triceps brachii or simply triceps is a three-headed muscle of the upper arm opposite the biceps. Its main function is to extend the elbow and is heavily involved in any pressing movement.

How To Do The Decline Push-Up

There are a few different ways to do this exercise although the general idea is the same. You want to elevate the feet, but you can use various heights to accomplish this and execution can and most likely vary between individuals.

Here are step-by-step instructions for how to perform this bodyweight exercise.

Here’s a video example of how-to, and not to do a decline push-up…

The decline push-up is as good as it gets for increasing the difficulty of a push-up. However, there are other great variations too.

This variation may shift more of the emphasis to the shoulders. However, it will still activate the chest and especially the upper area of the chest by the clavicle.

The dive bomber is kind of like a pike push-up and a basic push-up combined. However, you don’t want the hands and feet to be as close together as is the case with the pike push-up. It’s also going to be more challenging because there’s a lot more movement and support needed from the arms to properly perform this exercise.

It basically involves dipping under while moving the body forward and reversing the motion.

The Hindu push-up is similar to the dive bomber, however, you won’t reverse the motion by dipping backward. Instead, after the push-up part of the exercise where the hips are close to the ground, you’ll return to the starting position by keeping your body high off the ground.

Watch the video below to see it in action.

Related: 13 Next Level Push-Up Variations For Mass, Strength, and Performance

How To Incorporate The Decline Push-Up Into Your Training Routine

The decline push-up is the perfect bodyweight chest exercise whether you prefer to train at home with minimal to no equipment, in the park, or at the gym.

The order in which you perform the decline really depends on your level of training experience, goals, and availability of training equipment.

For example, if you’re doing a bodyweight-only session, the decline push-up should ideally be performed first before other push-up variations. This is because it’s arguably the most challenging push-up variation after the single-arm push-up.

So you’ll need to have enough strength to maximize your efforts. Not to mention, the upper chest area is oftentimes the most underdeveloped for most people so training it first makes total sense.

If you have access to weights or other resistance training tools, then do those exercises first before doing your push-ups, unless you find that the decline push-ups are as challenging as using weights or another form of resistance.

The goal should really be to have a predetermined rep range and aim for that in any given workout.

So for example, if decline push-ups are too easy for you, do them after your heavy bench presses. Otherwise, it may not matter how you incorporate them into your training regime.

We recommend doing 3-4 sets of decline push-ups to failure. This will allow you to really maximize the stimulation of the chest and other muscles involved while being as proficient as possible with this staple bodyweight exercise.

Of course, you’ll ultimately have to determine an appropriate set and rep range based on your level of experience, workout routine, etc.

The decline push-up is simply one of the best ways to increase the difficulty of your push-ups, build more muscle, and increase upper body pressing strength. You’ll need a prop but it’s not hard to find a chair if training at home or a bench if working out at the gym.

Not to mention, there are other great variations that you can do if you can’t quite do the decline push-up or even if you want to change things up a little.

As a bodybuilder, every exercise you do has a specific purpose – to make the target muscle bigger. However, a...

When it comes to choosing set/rep schemes for bodybuilding, most fitness experts suggest doing several sets of somewhere between 8-12...

If you want a great-looking physique, you need to increase muscle mass and reduce fat mass. This will leave you...