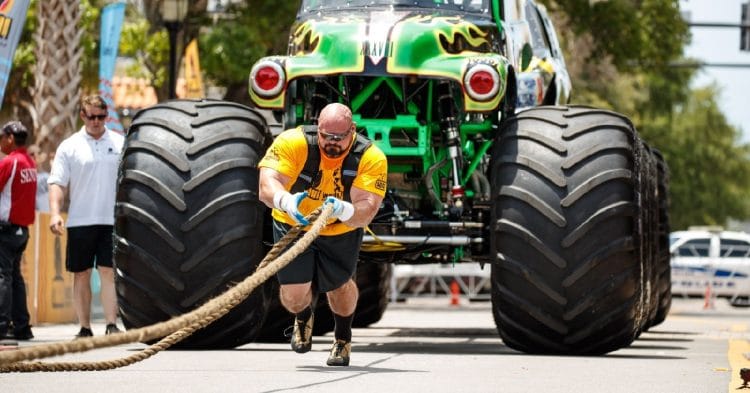 The 2020 WSM has been hit with wave after wave of disappointing news. With several athletes being unable to compete, there was already a sense of frustration from fans heading into the contest. Then the athletes were thrown a curve ball upon their arrival in Florida, as severe rain has been incoming on the forecast. So even though athletes received a list of likely events, and they knew it was a likelihood that the weather would force some sort of change.

With the contest beginning this week, fans have been clamoring to find out the events for the 2020 World’s Strongest Man. The day before the contest began, WSM’s Facebook page held an exclusive live stream to kick off the competition. Here, the events for both days of the qualifiers, going down November 11-12th, as well as the two days of the finals, on November 14-15th were revealed for fans to see.

Below are the events for the 2020 WSM, weather permitting:

In addition to the revelation of the events this year, the athlete groups were revealed for the 2020 World’s Strongest Man. The 25 competitiors are broken into five groups of five, who will go head-to-head to determine their place in the finals. This is how the qualifier groups break down:

What To Expect This Year

There is a lot to love about the 2020 World’s Strongest Man. First and foremost, there are a ton of athletes competing from around the world, all of which bring something special to the contest. Most eyes are on Brian Shaw as he tries to capture his fifth title at the event, but there are still other talented and strong athletes who look to spoil his party.

Read also:Robert Oberst: ‘The Gameplan Is To Be Strong And Be Fast’ At 2020 World’s Strongest Man

In addition to that there have been some big changes made to the production of WSM. Not only did the Facebook Live video provide us with a preshow, naming the events for this year, but the same page will be providing additional extra content throughout the week. Most notably, the results of each day’s contest will be announced on the stream, meaning that fans will not have to wait until the contest airs on CBS next month to know how things shake out.

The 2020 World’s Strongest Man has positioned itself to be one for the history books. The next several days will be bringing some excellent strongman action. Stay tuned to FitnessVolt for complete daily coverage, as well as athlete interviews and more forthcoming content.

Robert Oberst: ‘The Gameplan Is To Be Strong And Be Fast’ At 2020 World’s Strongest Man