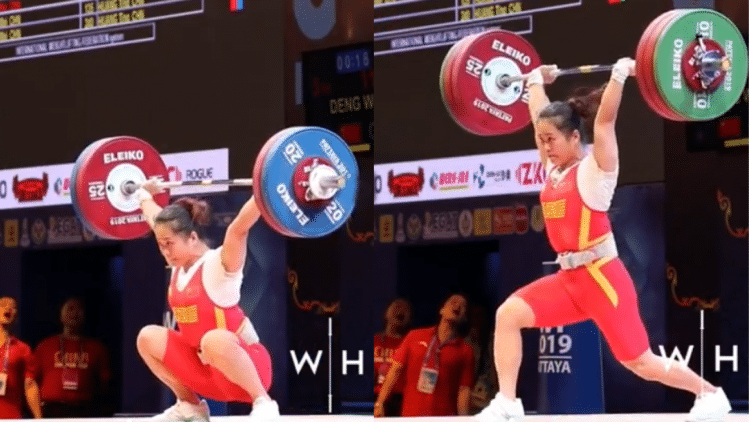 Deng Wei defended her title at the 2019 IWF World Weightlifting Championship over the weekend. This further cemented her place as one of the best 64kg weightlifters in the world.

When Wei entered this year’s world championships, she did so as a massive favorite in the 64kg division. She had won four previous world titles, and was looking for her fifth. Subsequently the expectations were high for this Chinese competitor.

Deng Wei certainly lived up to those expectations as she took the stage at the big event. She managed to not only win another World Weightlifting Championship, but broke world records along the way. Moreover, she absolutely ran over her fellow competitors, finishing the competition with these lifts:

Here is a video of one of her impressive lifts.

Going six for six in the day, these performances bested her opponents by more than 10kg. More than that, Wei crushed the records that she set the previous year. These were her lifts from the 2018 IWF World Weightlifting Championships:

So in comparison, Deng Wei showed improvement across the board. She increased her total by 9kg, as a result from 4kg in the snatch, and 5kg in the clean and jerk. At just 26 years old, it is clear that she is still improving, and that this world record will continue to grow for as long as she keeps doing what she is doing.

Deng Wei finished the competition in first place, securing her fifth world championship. This is the list of the top ten athletes in the 64kg weight class.

Additionally, following the impressive victory, Deng Wei posted a message to her Instagram. Here, she poses with her medal, and thanks her coaches and team.

At such a young age, it is clear that the best is yet to come for Deng Wei. Nevertheless, she continues adding accolades to her mantle, with this just being one of the bookmarks on an already storied career.