While speaking at the press conference before the 2020 Mr. Olympia, bodybuilding legend Dexter Jackson begins to cry discussing his retirement 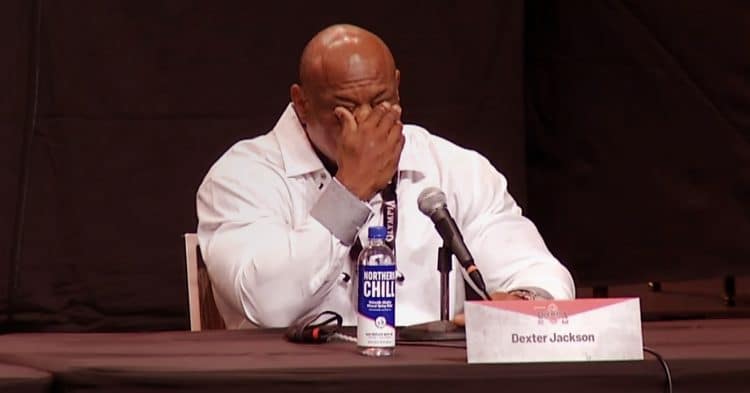 Winner of the 2008 Mr. Olympia, Dexter Jackson will be stepping on stage for the final time this weekend. Ahead of this final performance, he got emotional at the press conference, tearing up while reflecting on his career.

Few people will ever understand what it is like to be in the shoes of Jackson, as he heads into his final bodybuilding competition. The 51-year old has been competing for the better part of three decades, and has never been far from the best in the world. In spite of scoring 4th in the 2019 Olympia, and 2nd at the 2020 Arnold Classic, Dex has decided to call it a career after the 2020 Mr. Olympia. He has competed longer than anybody is normally able to, and even though he could probably keep going, he has decided that it is time to put his competitive life behind him.

Naturally, Dexter Jackson is a bit emotional heading into his last walk on the Olympia stage. At the press conference ahead of the event, he was asked about his mindset heading into his final show, and he began to tear up as he explained how he made the decision that it was time.

“I’m done, no matter if I win or lose,” Jackson said. “I’m trying to keep it together. I’m telling you man.”

Jackson tried to respond to a question about his emotional state, but could not find the words. In the background you could hear the other athletes telling him that they love him, and he says that it is because treats people with respect. Later on, to close out the press conference, he was given the chance to address the fans openly, and at this point he was unable to hold back his emotions.

“As you guys know, family is everything to me,” Jackson said while struggling to hold back tears while addressing his family in the crowd. “I’ve done this my whole career for my family, and I love you guys. I love this sport as well.

“I want to give a shout out to my fans,” Jackson continued. “You’re one of the most important reasons why I’ve been around so long. There’s come times where I contemplated. I’ve always said I’ll give myself a few more years.

I’ve always said we’ll see what happens. But I did say I’m retiring this time, and when I say that, that means just that. So don’t nobody think I’m joking, because I’m not. So I hope you guys really get this pay-per-view, because it’s going to be special. I brought a special package this year, I promise you.”

When Dexter Jackson steps on stage for the final time this weekend, it will be the end of a long and legendary career. You can see it all unfold, by watching the 2020 Mr. Olympia.

Catch all the Olympia action at FitnessVolt.com/olympia/