'The Blade' is looking unreal ahead of his 15th Arnold Classic appearance. 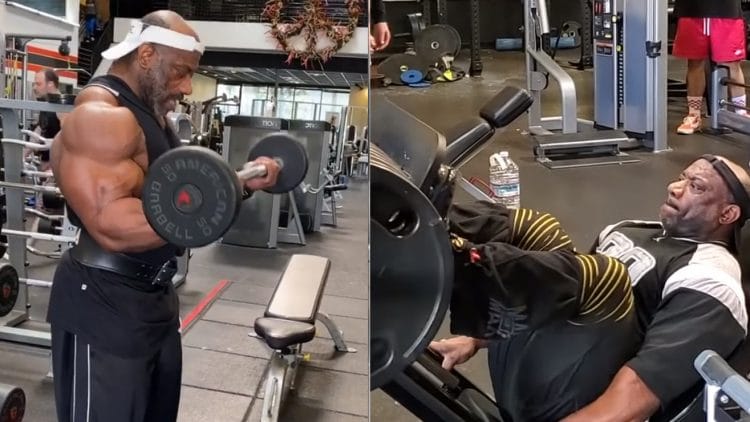 The 2020 Arnold Classic is literally just around the corner which means competitors are fine-tuning their physiques 4 weeks out from taking the stage. It’s going to be a super exciting event with many of the world’s best battling it out, and while we’re on the subject… it’d only be fair to include the winningest bodybuilder ever (record 5 Arnold Classic wins), who is none other than Dexter Jackson.

At 50 years old, no one has ever looked as impressive and to still be placing in the top 5 at the Olympia, well, he might just be from another planet. And to be able to still watch him in action is simply awe-inspiring. Well, 4x Mr. Olympia Jay Cutler recently posted a video of Dexter Jackson getting it on leg day as he prepares for the mega competition (5 weeks out) for March.

In the video, you’ll notice Dexter Jackson is hooked up to a contraption operated by IFBB Pro and Supercharged host Brad Rowe. But for those wondering, it’s called a Neubie (NEURO-BIO-ELECTRIC STIMULATOR) which is an electrical stimulation device from NeuFit. It works on body tissue and the nervous system to promote healing and neuromuscular re-education to improve overall performance and recovery. It’s also FDA cleared.

And you probably also noticed he’s still being trained by the famous Charles Glass too… this was a brutal workout that consisted of leg extensions, leg presses, reverse hack squats and more leg presses. And after the workout, Dexter Jackson praised this new approach of working with Brad Rowe and the Neubie. He explained that he doesn’t have knee pain anymore and the progress he’s made even since 2018 has been drastic.

And here’s a clip of him performing bicep curls 4 weeks out from the Arnold Classic where you can clearly see his insane development (nothing new really).

We’re anxious to see what Dexter Jackson brings to the Arnold Classic this year. We reckon he may even be better than last year after seeing his progress and… we all know what ‘The Blade’ is capable of. He’ll have some big competition though, with elites such as William Bonac, Big Ramy, Roelly Winklaar and other top guys who will also be bringing it.

But this has never fazed one of the best ever and we’ll see how it plays out. And, as usual, we’ll be sure to update you with more information about the big event.

Ample K Meal Replacement Review: The Answer To Ketogenic Nutrition On The Go?