Life and accomplishments of Dexter Jackson 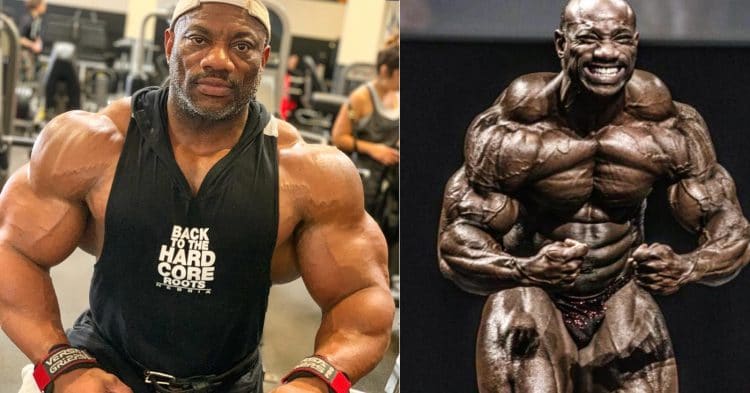 Dexter Jackson is an IFBB Professional Open division Bodybuilder/ former Mr. Olympia (2008). He’s the winningest bodybuilder in history, an icon of the sport, and still a top competitor in Open bodybuilding. This is his life story, competition history, diet, training routine, and more.

Dexter Jackson was born and raised in Jacksonville, Fl. He was one of the six children. Jackson played football in high school and was an exceptional athlete. In addition, he participated in baseball, ran track, gymnastics, and martial arts earning several levels of a black belt.

After his high school years, Jackson learned that he was going to be a father which made him decide that he’d get a job as a cook rather than attending college.

But it was during these years that Jackson discovered his love for training, obviously realizing that he was blessed hence why he was suggested to compete by friends. Shortly after, he competed in some local shows, winning his first-ever competition at age 20 and with only a few weeks to prepare for it.

Jackson went on to become a huge name in the industry, gracing the cover of major fitness magazines such as Flex, Muscular Development, MuscleMag, and more.

Dexter Jackson earned the nickname, ‘The Blade’ due to his sharp look.

His first NPC (National Physique Committee) competition was the 1992 NPC Southern States of which he placed 3rd in the lightweight category. Jackson earned his Pro card several years later at the 1998 North American Championships after winning the light-heavyweight and overall. He competed at the Arnold Classic the very next year and placed 7th.

This win made him one of only 15 men on the planet to win the title.

Not to mention, he took the title at the Masters Olympia in 2012 at age 43 after having placed fourth at that year’s Olympia.

What’s also very impressive about Jackson’s career is that he finished in the top five at the Mr. Olympia competition from 2002-2018 although he didn’t participate in the 2005 contest. He also holds the record for most Olympia appearances with 20.

At 49 years old, Jackson placed 4th at the prestigious Mr. Olympia competition in 2019. He also won the Tampa Pro the same year and finished 2nd at the 2020 Arnold Classic at age 50.

Earlier this year, Jackson announced that the 2020 Olympia will be his last competition. However, he recently explained in an interview that due to the current health situation, he may consider competing for another year to be able to compete in shows that he wanted too. He noted that he’d like to add the Arnold Classic Brazil to his resume as he hasn’t won that show yet.

Either way, Dexter Jackson has nothing else to prove and is one of the greatest bodybuilding of all time.

His incredible genetics and work ethic have allowed him to be where he is today with accomplishments that no man ever has ever achieved.

There are many great videos of Dexter Jackson’s training videos on the internet. So, we chose a few sessions that he did before months out from competing in the 2019 Olympia and 2020 Arnold Classic. He uses a good variety f machines which he has explained is safer for him.

Although, he’ll definitely do free weights as well.

The following is a quad-focused workout that Dexter Jackson did 5 weeks out from the 2020 Arnold Classic. He was connected to a Neubie machine while being monitored; which is an electrostimulation device by NeuFit that helps with muscular re-education, recovery, preventing injuries, etc.

He has noted that training with this device allowed him to get his legs back and he feels no pain in his knees. As a result, he can go pretty heavy with his leg exercises.

‘The Blade’ did the following hamstring-focused workout prior to last year’s Olympia.

Amid the current health crisis, Dexter Jackson posted a video showing what he eats to stay lean and in good shape. He also eats this exact, low-carb meal even when he’s dieting down for a big show such as the Arnold Classic and Olympia.

Jackson made it a point to mention that he does not cut sodium as it helps to keep the full look. So, he doesn’t hold back much with the seasonings. He explained that he only eats a few times per day and in the offseason, he’ll usually eat 4 healthier meals and 2 meals where he’s a little more lenient with his choices.

Shortly after, Jackson posted another video where he showed what he eats up to two, three weeks before a show.

Jackson filmed a documentary, Dexter Jackson: Unbreakable that was filmed by Alex Ardenti of Ardenti Films and made available in 2009.

He’s also a coach that conducts lessons for people looking to improve their physiques and has his own NPC bodybuilding show, the Dexter Jackson Classic that’s held annually in his hometown of Jacksonville, Fl.

‘The Blade’ Dexter Jackson is a bodybuilder to cherish if you’ve been fortunate enough to witness his greatness. At 50 years old, he still continues to place very high at major bodybuilding competitions and although he planned for one more show, he may extend his participation for an additional year.

And hopefully, he’ll snag a few more wins to add to his unparalleled resume.