Dora Justice also claimed a silver medal at the 2022 AMP Classic Nationals in her age and weight classes. 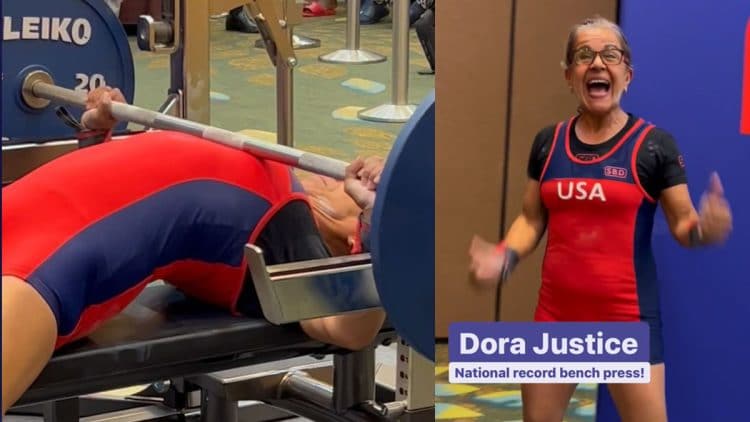 The 2022 Powerlifting America (AMP) Classic (Raw) Sub-Junior, Junior, and Master Nationals took place on June 18-19, 2022, in Orlando, FL. Although a few younger athletes, like Mahailya Reeves, gathered some attention, the 64-year-old Dora Justice managed to do the same.

Dora competed in the raw 57-kilogram weight class of the Masters 3 (60-69-year-old), and despite finishing in second place, she scored a new AMP American Bench Press Record of 72.5 kilograms (159.8 pounds).

Dora Justice opened her bench press campaign with a 65-kilogram (143.3 pounds) lift. She then added another 5 kilograms (11 pounds) for her second attempt, which was also successful. For her third and record-breaking attempt, Dora loaded 72.5 kilograms (159.8 pounds), which actually looked very easy for her. With another successful lift, Dora claimed a new National record.

Dora Justice weighed in at 56.5 kilograms (124.5 pounds) for the 2022 AMP Nationals. She crushed all other attempts, meaning that she went nine for nine and didn’t miss a single lift.

“Dora Justice @doraa_puente with a national record 72.5kg/159lb bench press in the 57kg master III class. Dora was a huge crowd favorite at Master’s Nationals because she got hyped up for every lift and was clearly having the most fun!”

Dora Justice started her professional powerlifting career back in 2003, under the name Dora Puente. Since then she accumulated 30 appearances in sanctioned powerlifting competitions and failed to win only four times. She has slightly better competition PRs than what she lifted at the 2022 AMP Nationals, but she is defying the process of aging by maintaining her shape.

It is not clear what Dora Justice’s next step will be, but following her recent success, she definitely became a potential IPF Record Holder. If she wants to claim the IPF World Record, Dora will have to take part in a competition sanctioned by them. Nonetheless, Dora will definitely keep crushing the weights in the gym and come back even stronger the next time.

The 2022 USPA West Coast Classic took place on November 5th, in Vista, California, and everyone anticipated the comeback of...

How To Do The Smith Bench Press – Benefits, Variations, Workout Tips, Optimal Sets and Reps

The freeweight barbell bench press may be hailed as the king of chest exercises but we'd argue that Smith machine...

Powerlifter Jen Thompson is easily one of the greatest women’s bench pressers ever and possibly even the best one. Over...