Keone Pearson is ready to dominate his next show and is focused on improvements: "Remaining the same will only hold you back" 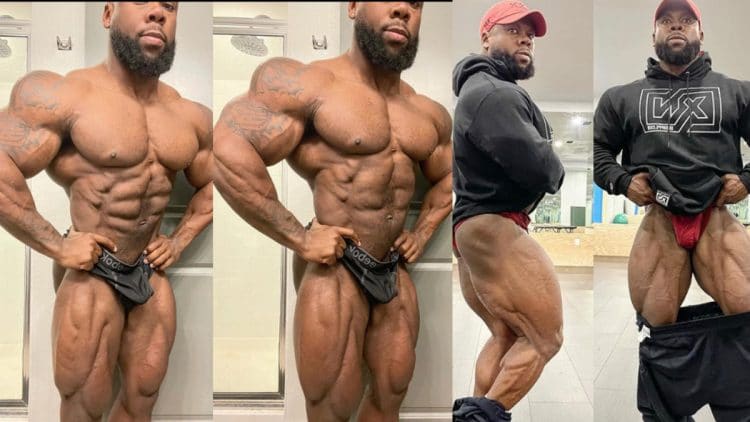 Keone Pearson plans to make a statement when he returns to his next bodybuilding show in roughly six weeks. In preparation for his next contest, Pearson shared a physique update and a video of him squatting over 800-pounds on the squat machine.

Pearson quickly grew in popularity during 2019, a season that saw him perform exceptionally well at three IFBB Pro League events. He came in fourth place in Classic Physique at the 2019 Arnold Classic in his first attempt at the prestigious event. After the stellar performance in Ohio, Pearson picked up one of the biggest victories of his career after winning first place at the New York Pro. He capped off the season competing at the 2019 Olympia, ending the year with a fourth-place showing.

Despite only competing at one show in 2020, Keone made the most of his time, as he made a successful debut in the 212 division, earning first place at the 2020 Chicago Pro. Returning the next year to the same show, Pearson made light work of his competition in Chicago once again, finishing first place in the 212 division. After punching his ticket to compete at 2021 Mr. Olympia, he competed at the show but walked away in 14th place.

The bodybuilding season is in full swing. The Texas and Tampa Pro contests are rapidly approaching this summer. Should Pearson win either show, he will earn his invitation to compete 2022 Olympia in the coming months.

In a recent post made to social media, Pearson showed off a small waist, massive arms, and impressive V-taper development as he continues preparations.

Pearson is ‘working harder every day to get better’ and plans to add muscle to his frame ahead of his 212 appearances in Texas and Tampa, Florida. Many have acknowledged that if Pearson can add extra definition to his lower body to match his spectacular upper body, he would be incredibly difficult to defeat on stage. The 212 competitor turned heads following his physique update after hitting a gargantuan 800-pound squat on the squat machine.

“Make sure you’re working harder everyday to get better . Remaining the same will only hold you back.
#championmindset⭕️nly“

Pearson is widely regarded for his ability to push during training sessions. He has trained with the likes of 212 Olympia champion Shaun Clarida. Despite both men vying for the same crown at Olympia, Pearson appreciated how Clarida approached training sessions, especially when it came to improving the upper body.

According to Keone, one of his goals as a 212 competitor is to shape his physique like veteran Shawn Ray’s build. Ray is considered to be one of the more elite bodybuilders with a smaller stature to compete before the 212 division was implemented in competitions.

If Keone is able to make it to Olympia this year, he will have to contend with an elite crop of talent in the 212 division. Former 212 champion Kamal Elgargni is training hard with Men’s Open mass monster Nick Walker to prepare for the event. Meanwhile, reigning 212 Olympia champion Derek Lunsford is also in the heat of off-season preparations, despite speculation about him moving into the Men’s Open division.

RELATED: Keone Pearson: Doing Classic Physique Is ‘A Pain In The Butt’

With 2022 Olympia less than six months away, Pearson still has time to make improvements en route to winning a bodybuilding show for his invitation. Given the balance and aesthetic look to his physique, it appears fans may witness the best package yet from Pearson later this year.