The dumbbell rear lateral raise is an isolation exercise that's effective for working the muscles of the upper rear including the posterior deltoids. In this guide, we've explained how to do it with tips, variations and more. 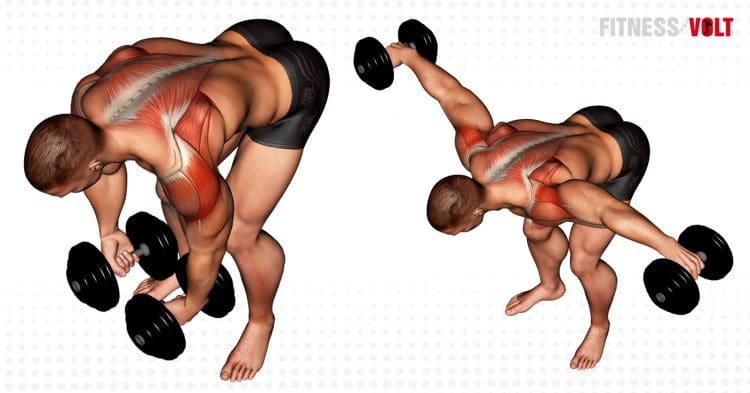 The dumbbell rear lateral raise is just one of the many great isolation exercises that help to develop the upper posterior (backside of the body) muscles.

The rear deltoids and upper body muscles, in general, are commonly neglected for many reasons. However, they contribute greatly to postural health, lifting posture, and aesthetics. Therefore, taking the time to focus on these muscles is non-negotiable.

In this guide, we’ve explained how to do this exercise with tips, variations, and how to most effectively include it in your training.

The deltoid posterior or rear delts is considered one of the three shoulder heads. It helps the front delts to stabilize the arm while the lateral delts abduct the arm (bring away from center of body) from 15-100 degrees.

This head also works with the latissimus dorsi muscle of the back, to extend the arm while walking.

Again, many exercisers will neglect to train this muscle directly but that’s not recommended for health, posture/lifting posture, and having well-rounded and developed shoulders.

Another head of the shoulders, the deltoid lateral is primarily responsible for abducting the arm from 15 to 100 degrees. It also helps to prevent displacement of the glenohumeral joint when the arm is pressed up against the body and under load.

The lateral delts give that very attractive roundness, and width to the upper body and common exercises involve raising the arms laterally away from the body.

Another rotator cuff muscle, the teres minor lies below the infraspinatus and deep to the deltoid. It also contributes to arm movement and function at the shoulder joint.

The trapezius muscle or traps for short is a large muscle that spans the upper back near the neck and looks like a trapezoid, hence the name.  It consists of upper, middle, and lower fibers that all contribute to separate functions at the scapula or shoulder blades, most notably posture.  The lower fibers help to pull the scapula down and lift the scapula with help from the upper fibers.

The middle fibers of the trapezius retract or pull back the scapula.

How To Do The Dumbbell Rear Lateral Raise

While the dumbbell rear lateral raise is not a complex exercise, we’ve provided step-by-step instructions.

While the basic standing exercise is effective, we also recommend these variations/alternatives that have their own advantages.

Chest-supported variations are great because your upper body is stabilized and you’re less likely to cheat which you probably won’t be able to use as much weight.

Any exercise using dumbbells can be done with cables. The advantage of using cables is that there’s constant tension on the muscles regardless of your body position and this allows for more options.

The cable rear-drive and other similar exercises are also great.

The bent-over row is just an all-around superior posterior chain movement. But you can emphasize the upper back and delts better by rowing into your delts as opposed to lower on the torso like with the conventional bent-over row.

Rows also allow you to use more weight than a raise so it’s a good strength and mass builder.

Using The Dumbbell Rear Raise Into Your Training Routine

Because the shoulders are composed of three separate heads, it’s important to isolate all three.

The dumbbell rear lateral raise is one way to train the posterior delts and it’s good enough as a standalone exercise to target the rear delt head. If your rear delts are underdeveloped, you may also want to include another isolation exercise in the same workout as well.

While this is not set in stone and you’re free to experiment and try different set and rep ranges, we recommend anywhere from 2-4 sets of 8-20 reps for those not as experienced. Of course, you can mix up the reps depending on your goals.

The dumbbell rear lateral raise makes for an ideal addition to your posterior deltoid workouts. It’s an effective isolation movement that anyone can do safely and effectively and can be combined with other shoulder exercises to build round delts.

Strength and bodybuilding can often seem to be complicated subjects. For example, trying to find a definitive answer to the...

The push-pull-legs (P-P-L) workout is one of the most popular training programs in bodybuilding. Even the legendary Austrian Oak Arnold...

Your shoulders are probably your most visible body part. Whether you are fully dressed or wearing a workout vest, well-developed...

The deltoids are a complex muscle group. There are three deltoid heads, and while they often work together, they can...