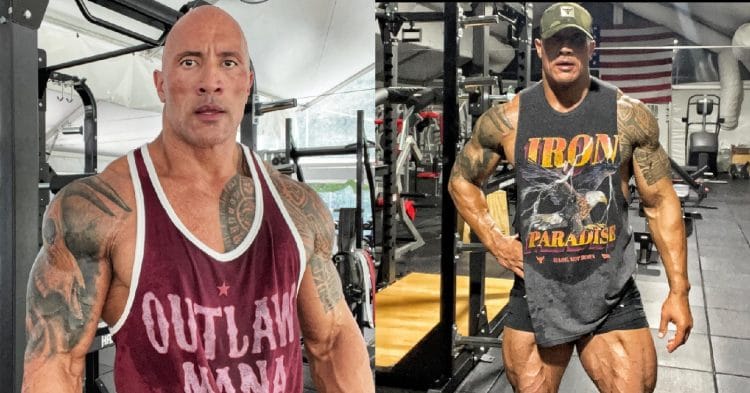 As he prepares to take on his first role as a super hero, Dwayne Johnson has been working hard in the gym. Now he is in the craziest condition from his entire time in Hollywood.

When Johnson made the move from WWE to Hollywood, he was already at beast of an athlete. He seemingly on the girl inside since then, with his various movie roles calling for him to be about as jacked as possible.

However this was far from the end for The Rock, as he realized as soon as he signed on to play the titular role in the upcoming Black Adam movie, that it takes a different level of physical conditioning to play a superhero. So, he has embarked on a journey, which has spanned over several months, that has seen him getting into arguably the best shape of his life.

At least, we know for sure that Dwayne Johnson is in the best shape of his entire acting career as a Hollywood superstar. That’s what he explained in a recent Instagram post, which gave an update on his physique as he finishes filming this movie.

As he explained to the post, he is currently filming some scenes that require him to take his shirt off and show off his body. So he has really been working on his conditioning, in order to get in the best shape of his career, and judging by the picture he shared it has worked.

“Late night training 🕛🔥
Big week for #BlackAdam shooting my “champion” scenes with my shirt off and showing my body,” Johnson wrote.

“Been working extremely hard dieting, training and conditioning unlike any other role of my entire career.

“Manipulating water, sodium, cardio but also having to push and pull real iron to have dense, dry, detailed muscle.
It’s a real science that takes months and months to dial it all in with my strength & conditioning coach @daverienzi who keeps a very watchful eye, constantly fine tuning our strategy daily,” Johnson continued.

“As many of you know, the intense (and exciting) comic mythology of Teth Adam – he becomes the immortal “champion” by the Gods.
Blessed with the powers of Superman and dangerous magic from the wizards.

Big week, grateful for the grind & support – here we go🤞🏾”

Is clear that he is in tremendous shape, is Johnson prepares for his first ever role in a superhero movie. He has been undergoing an intense training regimen, and the results seem to be paying off.

Not only is The Rock looking jacked as always, but he looks to be about as lean and conditioned as we have ever seen him. It is going to be fascinating to see how it translates on the big screen, but so far so good for the former WWE champion.

Black Adam is set to hit theaters on July 29th, 2022. Even though that is a long ways away, we will keep checking out Dwayne Johnson on social media, to get a glimpse of how the movie is coming together.