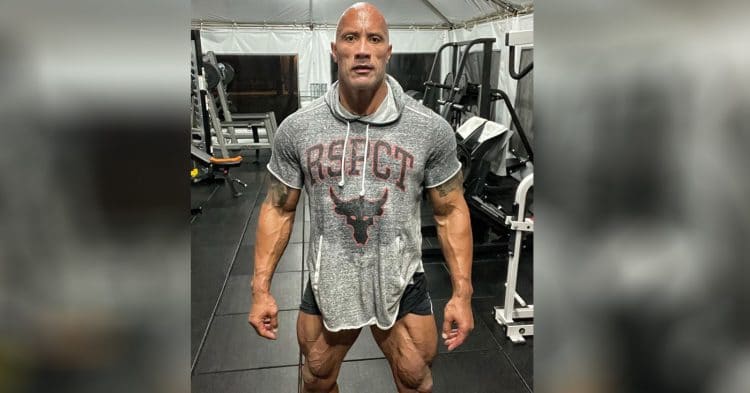 Dwayne ‘The Rock’ Johnson is the biggest star in Hollywood which is really nothing new… and neither is the fact that he’s an icon in the fitness world. He’s been fortunate enough to be able to merge the two; evident by his typical film characters. That won’t change with his upcoming role as the villain himself in DC’s Black Adam that will begin filming in April 2021 (next month). The Rock recently shared on Instagram what he says is his toughest workout in preparation for the film and he wasn’t lying.

Here are the details from the workout routine that he shared with his over 200 million Instagram followers.

“Swipe left as we save the hardest workout for last.
Saturday midnight leg workout for my #BlackAdam⚡️training.”

The Rock ensures he’s fully prepared for a lower body workout by doing a sufficient warm-up that takes him about 20-30 minutes.

“I know you’ve been waiting for this one so here’s an idea of the flow, and keep in mind my pre workout warm up and stretching is a lot longer (20-30min) since training legs requires ALL YA GOT!”

The Rock performed giant sets for this workout, which are essentially big supersets. He chose five exercises and performed them in order with no rest in between which made the workout even more extreme.

“* these are giant sets * so mentally prepare yourself,” he wrote.

“Multiple rounds of these Giant Sets. These are a real bitch so get your mind right and push yourself.”

“Then I’ll finish off with hamstrings and calves.”

In the video, the Rock explained that he likes to use the alternating leg press of which he’ll do a ladder routine. He’ll then move onto walking lunges while using chains that weigh almost 100 pounds.

Next, he’ll do shark pit squats and for those unaware, this exercise is performed by using a lifting belt around the waist that you attach to the machine. It’s a great alternative to back squats because it removes a lot of load from the spine.

He’ll finish off the giant set with basic barbell back squats and then complete his session with some hamstring and calves.

The rest of the caption from the post read:

“It’s a lot of hard work (especially balancing everything else life throws our way) but I really enjoy the challenge of new goals.
New things to build.
Pushing myself.
It gets my blood going.

But just as important, I really enjoy the challenge of delivering something (hopefully🤞🏾) great and with quality – TO ALL OF YOU.

That really gets my blood going
😊🩸

I always say you guys are my #1 boss, so I always gotta try my best to DELIVER THE GOODS.
Whatever that may be.

Train hard and enjoy your Sunday, my friends“

The Rock is looking insanely jacked right now as his six-day per week training split to prepare for the film is clearly paying off big time.

In the post below from a few weeks ago, he described his daily routine that consists of cardio on an empty stomach followed by a weight training session at night. His first workout for the week is back and biceps of which he uses supersets to really pump blood in the muscles.

The Rock said that he wants to raise the bar with his Black Adam character not just from a physical standpoint but also because of the literature/mythology behind the character.

“The fun Black Adam literature/mythology study combined with the physicality the character commands makes for a one of kind prep I’ve never experienced before in my career.

And if I fail or suck at it, at least I’ve given all I got.
The kid’s going out swinging …“

Here he talks again about “reading minds” and “coming to raise the bar” for his new role and he explains his shoulder workout.

I think it’s safe to say we should expect the usual massive Rock in the upcoming Black Adam film, although we’ll have to wait past the initial December 22, 2021 release date as the film was pushed back due to Covid-19.

But fans are no doubt excited to see him on the big screen and we are too.