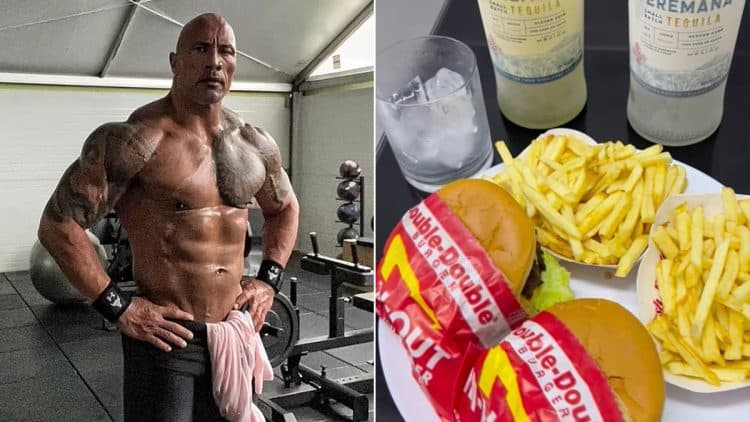 Dwayne Johnson, popularly known as The Rock, is famous for his dedication to maintaining his fitness levels. In a recent post made to Instagram, The Rock revealed a ‘cheat meal for the history books.’

After his dreams of making it to the NFL faded away, The Rock moved over to professional wrestling. He made a name for himself as the most electrifying man in entertainment and was touted as the People’s Champ.

Hollywood soon came knocking on his door presenting a new opportunity to explore the world of fame and glamour. Two decades on, Dwayne topped the Forbes list of the top ten highest-paid actors of 2020 for the second year in a row. If it wasn’t for the pandemic, Johnson might have extended his streak even further given his immense popularity.

Recently, he took his physique to the next level in preparations for a role in the upcoming DC movie, Black Adam. Although he was already buff, Johnson added even more muscle to his frame to make sure he looked like a real-life superhero. He had previously gone through 172 days of a “strict & intense 7 meals a day diet” to prepare for the titular role in the movie, Hercules.

Johnson is renowned for his discipline when it comes to staying in shape. But it’s not just his workouts that capture the attention of many as he’s also very well-known for his epic cheat meals. Adhering to a strict diet throughout the week, Johnson likes to indulge in his favorite foods on cheat days. Following weeks and sometimes months of sticking to a rigid meal plan can be tough for anyone. Dwayne has stated that cheat meals should be the most extreme as he feels like he’s earned them.

In a recent Instagram post, The Rock shared his latest cheat meal. Johnson tried the famous west coast burger chain In-N-Out. He got two double-doubles, which includes an extra beef patty. He also bought a couple of french fries to pair the meal with his own tequila brand, Teremana.

“A #cheatmealsunday for the history books!

My first time ever eating @innout 🍔

A solid start with a bite of good fries 🍟 as we know shitty fries can ruin the whole experience.

Pared the main course with a (quite delicious) combo pour of @Teremana Blanco & @Teremana Reposado – as founder, I make up the tequila rules 😁🥃

This cheeseburger connoisseur will now add In & Out to “the list” 🍔📝

Enjoy your cheat meals, my friends.

As one of the most successful celebrities, The Rock has a lot on his plate but continues to inspire his followers. He had recently shared a high-volume leg workout with his fans where he encouraged them to focus on having more time under tension during training sessions.

Judging by the monstrous cheat meal he just earned, Johnson will unveil an improved version of his physique in Black Adam this October.