The wrestler-turned-movie star harnesses the power of motivation in the gym to attack his challenges in life. 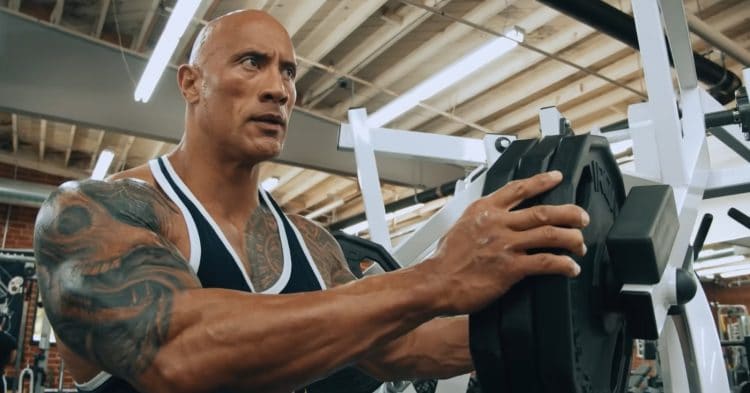 The Rock Motivation (Image: The Rock/YouTube)

A famous boxer by the name of Marvin Hagler once said: “It’s tough to get out of bed to do roadwork at 5 am when you’ve been sleeping in silk pajamas.” While that statement rings true for many, The Rock takes pride in the hard work and consistency he’s developed despite being met with tons of fame and fortune.

The charismatic actor is always working on something. Whether it be his physique for an upcoming movie role or just a tour of his ‘Iron Paradise’ home gym, The Rock gives new meaning to the definitions of hard work and dedication. The superstar’s training philosophy has helped him achieve his gym goals year after year.

In addition to his bulletproof mindset, the top-grossing actor is known for his taxing midnight training sessions. In the past, the actor has equated his late-night training routines to therapy appointments, only instead of a couch and a psychiatrist, it’s his signature metal chains clanking inside of his massive gym setup.

The famous actor shared how important working out is to his psyche and overall health in a recent YouTube video on his channel. Processing life’s challenges can be a daunting task, but The Rock maintains that his daily workout routines enable him to approach his problems head-on in a cathartic manner.

“I don’t just load these bars with metal plates. I put everything on them,” he says. “My anxieties, my fears, my hopes, my dreams, and my responsibilities as a provider, a father, a husband, a businessman. And some say, even a leader. Whatever I’m dealing with out there, that’s what I’m working through in here.”

“In the gym, as in life, raising the bar isn’t always about putting on a big show,” he continues. “It’s the small quiet promises you make to yourself. The ones you could break, and no-one would know, but you don’t. You show up every day and meet this gym on its terms; with humility, gratitude, and respect. Through struggle, through pain, through sweat. Through the little voice deep in your gut that says you could quit any second, but you don’t. You raise, and raise, and raise again.” The Rock said.

Before this motivational video, The Rock has long advocated for approaching problems from different perspectives to achieve favorable results. The revelation for the Hollywood star came when instead of thinking in terms of “I have to” he started to shift his mentality to “I get to”. It appears the change proved to be an effective one in light of his lasting success.

“When it comes to hard work and things I’m passionate about – years ago, I stopped saying ‘I have to’ and started saying ‘I get to,'” he wrote. “Big psychological shift on how you approach the daily grind of shit we gotta get done… I ‘get to’ train hard and push myself to the breaking point. I ‘get to’ get my ass kicked and come back stronger. I ‘get to’ be the hardest worker in the fucking room. Because when you ‘get to’ do the things you love – it’s a privilege.”

Focused on being the best version of himself, The Rock often shares his training exercises on social media. The larger-than-life celebrity recently showed off a brutal weighted lunge workout he dubbed, “The Walk Of Hell” last month. With a firm commitment to improvement in every facet of his life, the famous actor attributes much of his success in life to his way of thinking.

Despite the busy nature of The Rock, the superstar values his time in the gym, as it provides relief in more than one area of his life. The Rock underlines that working out daily is paramount to enjoying life and taking on the challenges that come with it.