Dwayne "The Rock" Johnson prefers to save his 'most grueling workout of the week' for last. 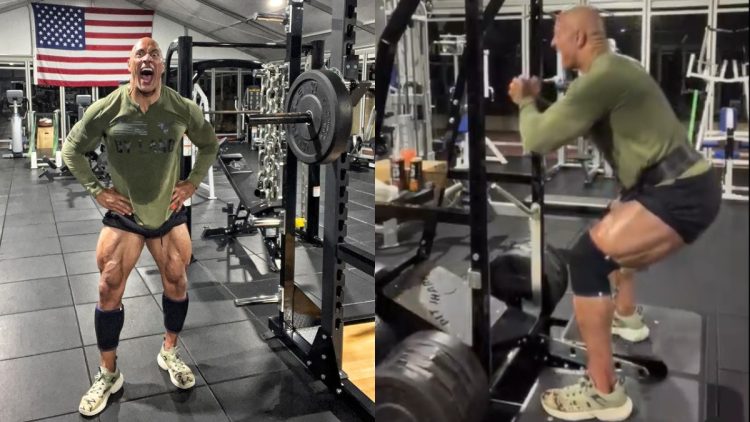 Dwayne “The Rock” Johnson has long established himself in the world of professional wrestling, acting, and fitness. In a recent post made on Instagram, The Rock demonstrated a series of Pit Shark squats — a high-volume finisher he utilizes with three second-negatives until failure.

The Rock is revered for his dedication to fitness while maintaining one of the best physiques in Hollywood. Before pursuing a successful acting career, The Rock was a mainstay in the World Wrestling Entertainment (WWE) for over eight years. As of late, the famous actor has refocused his efforts for a leading role in DC’s Black Adam. Since the film requires him to play a burly superhero, The Rock is keen on adding quality muscle to his physique.

In preparation for the movie role, and just to stay healthy overall, The Rock routinely shares grueling workouts on social media. He prefers to show off his exercises online, which are usually performed at his home gym named ‘Iron Paradise.’ One important aspect The Rock abides by during training is performing slow and controlled reps. He demonstrated this training concept to great effect while practicing barbell shrugs. The Rock is a proponent of midnight training and equates his home gym workouts to late-night therapy sessions.

The Rock Favors Time Under Tension During Training Sessions

In a recent post made on Instagram, the charismatic actor gets a killer burn-in while hitting a belted squat variation.

“F’n burn.
Excellent high volume finisher for me with all my crazy football and wrestling injuries.

5th and final Giant Set of doing 5 exercises in a row with no rest.

I like saving my most grueling workout of the week for my last (usually falls on Sat or Sun).
It becomes a forcing mechanism all week because I know the storm of leg training is coming 🌪☄️” The Rock posted.

According to The Rock, when it comes to working out any body part, he likes to focus on quality, controlled reps because they allow him to feel the ‘burn’ he’s looking for.

The former Pro wrestler recently hit a chest finisher workout and emphasized how important time under tension is for muscle growth. The workout he chose isn’t just a great fat-burning movement for leg day but also an ideal method used to safely strain the lower body. Anytime he’s hitting a demanding workout on leg day, The Rock prefers to start his morning off with a ‘power + energy’ breakfast, which consists of steak, eggs, oatmeal, and five PB&Js.

As one of the busiest actors on the green screen, The Rock makes the most of his time training, even on brutal leg days. Judging by his recent squat variation exercise, The Rock plans to look his absolute best when Black Adam makes its way into theatres in October.

Bodybuilder Chris Bumstead is steering effortlessly around many difficult circumstances in his 2022 Olympia prep. Bumstead is one of the...