Strongman Eddie Hall put his strength to the test in a big way recently, when he did a bench press with four women 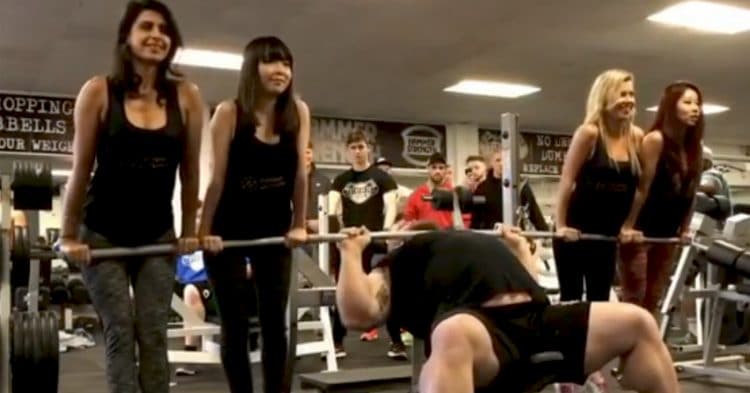 Eddie Hall may have his hands full with training for his boxing match with Thor Bjornsson, but he is still a strongman at heart. He proved that in a big way recently, with a crazy bench that saw him pressing four people.

Hall may be retired from strongman competition, but he is still constantly living an active lifestyle. Most recently he has been putting his focus into boxing training, which has seen him undergo an insane physical transformation.

Through this cardio-heavy training to prepare for a boxing match, Eddie has dropped a ton of weight. He now looks healthier and leaner than ever, and still has 8 months before the boxing match.

Yet just because Eddie Hall is dropping weight, that does not mean he is any less of a beast in terms of strength. He decided to prove that recently, and did so in a bit of a unique way.

Taking to Instagram, the English strongman was seen hitting the gym for an upper body session. However rather than a traditional bench press, he decided to gather four ladies to hang off the bar, while he pressed them for three reps.

That was an impressive feat of strength from Hall, to say the very least. He seemed to be hardly struggling while carefully pressing these ladies without going too fast. It was quite the sight to bear witness to.

The women deserve some admiration too, simply for being willing to participate in this. Not to mention the fact that it must not have been easy to stay balanced while the bar was moving up and down.

Of course, if you are a fan of Eddie Hall, you know how much he enjoys putting himself through different physical challenges. A few days earlier he put up the “Beast Challenge,” seeing if people could do better than his 47 push-ups in a minute.

It seems that no matter what he is doing, fans like to see Eddie Hall put himself through the wringer with some sort of crazy feat of strength. That being said, perhaps the biggest test yet will come in September, when he faces Thor.

These two have a legitimate rivalry, at least competitively. They have both been putting in the work to get in shape and learn to box, and it will be exciting to see how it all goes down when they finally share the boxing ring.