The 4x CrossFit champ does first back squat session and husband/coach Shane Orr shares some of his strategies. 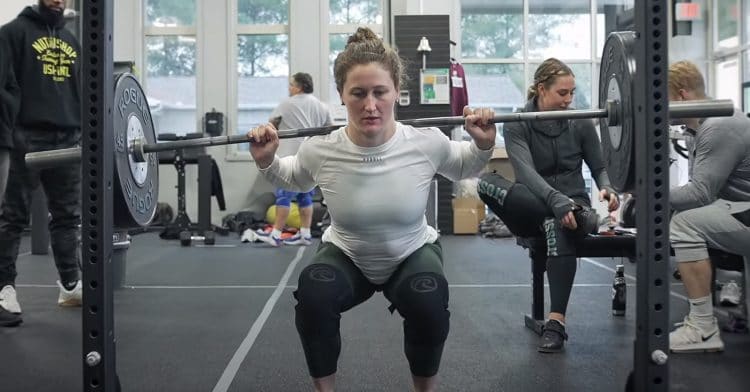 Not long after, she and husband/coach Shane Orr announced that they’d be relocating to South Korea to train for the 2022 Winter Olympics, where the Australian native plans to represent her country in the bobsled.

But until the Visa situation is sorted out, they’re in Tennessee, their current home away from home where they continue to train and are now preparing for the CrossFit Open.

Toomey explained that she hasn’t squatted since the CrossFit Games Total (one-rep max squat, shoulder press, and deadlift event), so the goal for this session was just to get her body moving.

“We’re really just trying to get the body moving again, and so seeing where we’re at, no pressure whatsoever, focusing on technique.”

So it was all about feeling the movement and not as much about intensity. Toomey mentioned that Orr threw out some percentages he’d like them to hit but if they didn’t, no biggie!

Orr then talked a little about their strategies during the CrossFit Games at about the 1:37 mark, of which you can have a listen.

Then Toomey shared her experience with the CrossFit Total event.

“When I looked back at the field that we had, I was set in such a great advantage point where I was the last person to lift.”

Toomey knew her competition in that event was Brooke Wells, and her strategy was to go off of what the latter was doing to gauge what she needed to do to ensure she was ahead.

She knew Brooke was strong at the deadlift, so if she could stay ahead with the overhead press and deadlift, she’d be fine when the deadlift came around. And Toomey is excellent all-around which is why she was able to create the desired outcome.

Toomey hopes that they keep testing the total because it shows how much competitors keep improving.

Prep for the Open

Orr mentioned that they’re currently doing a 10-week weightlifting/strength cycle to prep for the upcoming CrossFit Open. Although, he said they were doing a testing phase right now.

“Hopefully in ten weeks from now when we’re closer to the Open, we’ll be right where we want to be.”

Why you shouldn’t care about 1RM (one-rep max)

“I was telling Tia earlier and in fact Brooklyn earlier that I’m more intrigued about what your 3RM is and what your 5RM is than your 1RM.”

“Essentially if you look at the data or the workouts that have been applied to CrossFit Games and any sanctioned events, if you see how many competitions require you to go to 1RM in a spectrum of percentage it’s not generally that much.”

He explained that many test multiple times of a heavy load more related to 3 and 5RM. He knows this will compliment the 1RM too.

Toomey explained that they worked up to about 195lbs on the back squat but nothing too crazy. It was all about volume and quality reps. They finished with some accessories such as the dumbbell bench press and glute ham raises.

She mentioned how important accessories as it helps with structural health, longevity, and movement patterns.