Female bodybuilder Gui Yuna has one leg, but that has not stopped her from winning her bodybuilding debut in China 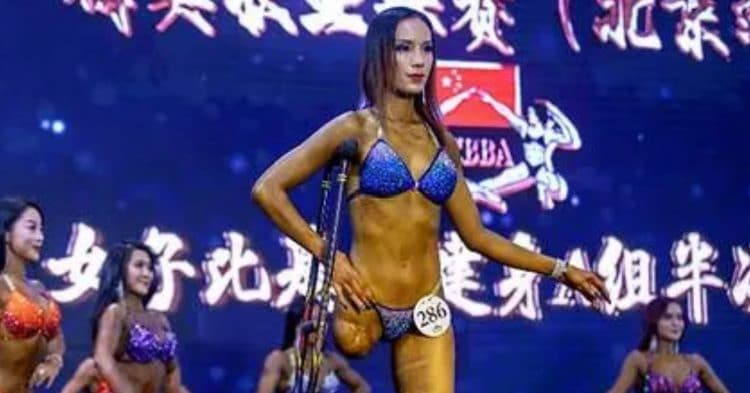 There may be divisions in bodybuilding that are adaptive, but that was of no interest to China’s Gui Yuna. Despite having just one leg, she was able to crush the competition and win her first bodybuilding contest recently.

At just seven years old, Yuna went through one of the most tragic moments imaginable: she got hit by a truck. While she does not remember much about that fateful day, she remembers what happened after the fact.

Losing her right leg in the accident, she had to learn and adapt to her new life. She had to go from being a normal little girl, to one who learned to deal with bullying by turning to fitness.

This paid off in a big way too, as Gui Yuna has gone on to find success in the fitness world. She competed in the Paralympics, doing the long jump in 2004, but she realized a few years later that her passion was somewhere else.

Finding a love for bodybuilding, Yuna entered her first bodybuilding show last October, competing at the IWF Bejing. Not only did she win this contest, but she won the hearts of Chinese fans with her inspirational story.

When she graced the stage, the young bodybuilder had the type of physique that makes you forget what is missing and focus on what she has. She immediately began gaining attention for her athleticism and skill.

“It’s possible that I won first place not because of my professionalism or muscles, but because of my confidence and bravery to stand on the stage and show myself to everyone,” Yuna said after her win.

VIDEO: Losing a leg did not stop Gui Yuna from achieving her dreams. The 35-year-old former Paralympian has now chosen to take on competitive bodybuilding, and has gone viral on Chinese social media for her positive attitude and inspiring story pic.twitter.com/HtE7nynT5K

Yuna trains at a gym in Shanghai, alongside her coach Zhu Liping. Here the pair have worked to develop her physique to the point where it is stage-ready, and they have done well at it, as evident by her first competition.

The type of perseverance and willpower it takes to go through what she has overcome, and come out on the other side with a positive outlook is incredible. She is a credit to herself, and others who think that they are incapable due to disabilities.

It will be interesting to see where Gui Yuna goes from here, but there is no doubt that whatever path she chooses to take, she has the willpower to find success. So far so good, for the young and motivational bodybuilder.