Strongman Eddie Hall discusses the idea of fighting Jake Paul after his boxing match with Hafthor Bjornsson, and reveals how much he would want to get paid for the fight 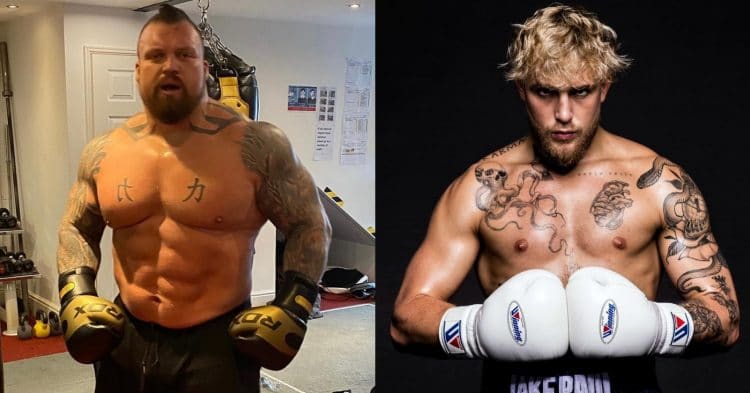 YouTuber turned boxer Jake Paul has been making a lot of noise in the sports world for his efforts in the ring. He has gotten the attention of Eddie Hall, who would be interested in fighting the influencer.

Hall has been working on making his own transition to the world of boxing, facing fellow strongman and rival Hafthor Bjornsson. The two have a long-standing beef that they look to settle in the ring, this September.

As for Jake Paul, he has been rather successful in his early forays into boxing, going 3-0 as a pro with all of his wins coming by way of knockout. His most recent victory came in a cruiserweight bout against former UFC fighter and Olympic wrestler Ben Askren, where he scored the victory in just under two minutes.

Given the similar experience levels and social media presence, some have wondered if Eddie Hall would be interested in fighting Jake Paul. In fact this was a topic that was brought up in a recent video to his YouTube channel.

The video largely consists of a lighthearted Q&A session, done in between sets of a hardcore training session. The last of these questions was how much money it would take for him to fight Jake Paul after the fight with Thor, and it is safe to say that he is rather willing to take this fight, if the price is right.

“I would (fight Jake Paul) actually. He’s actually surprised a lot of people, a lot of people laughed at Jake Paul. But he came out of the woodwork, he’s obviously trained very hard and he’s smashed his first victims in the ring, and he’s lined up a few more,” Hall said.

“Massive size difference, but there is between me and Thor, and Mike Tyson is living proof that size doesn’t really matter in the ring. It’s about what you do in there, how fast you are, how powerful and agile you are. That’s what matters.

Given the fact that Eddie Hall outweighs Jake Paul by about 150lb, it seems hard to believe that they would actually fight. However it would certainly be an interesting sight to see them face off in the ring against each other.

The 15 Best Back Exercises at Home + Workout