With their boxing match less than six months away, Hafthor Bjornsson and Eddie Hall show off their insanely jacked physiques 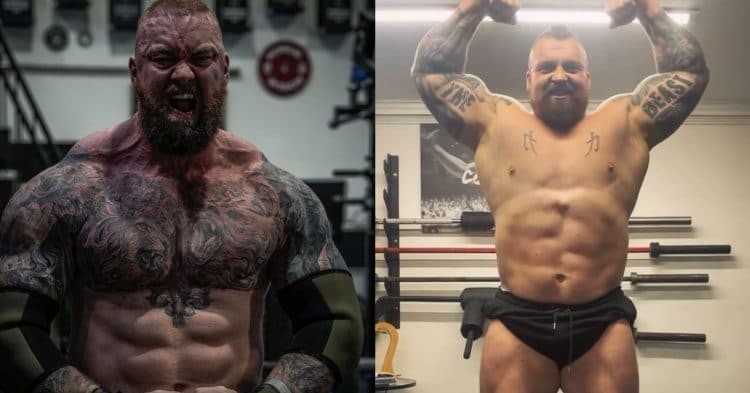 With each passing day, we are getting closer and closer to the highly anticipated boxing match between strongmen Hafthor Bjornsson and Eddie Hall. With the contest fast approaching, each man shows off their physiques and they are looking jacked.

To put it mildly, Bjornsson and Hall have taken very different approaches to training for their fight. While they each have a seemingly equal amount of dislike for each other, and desire to knock one another out, both men have taken different paths to get to that point.

That said, there has been a common theme between both as they progress through their camps, and that is the incredible physical transformations they have undergone. As time goes on and they put their focus into the cardio-based training necessary for boxing, they each have dropped a ton of weight and shown off insanely lean physiques.

The product of this was seen again in a big way recently, after both Hafthor Bjornsson and Eddie Hall unveiled their current physiques with independent updates. The first one came from Eddie, who posted a bit of a moving picture to his Instagram.

This update saw him checking in at a lean and shredded 356lb. With a brief flex, he shows off his six pack abs and gigantic arms, looking to be in the best shape of his life.

As impressive as Eddie Hall looked, Hafthor Bjornsson felt the need to follow this up with his own physique update. Unlike Eddie, Thor has already had an exhibition boxing match, and he has another one booked for next month, against powerlifter turned MMA fighter Alex Simon.

In his update, Thor looks to equally be in phenomenal condition while he gears up for this second ring appearance. He also took a second to remind everyone why he earned the nickname of the Mountain.

With their boxing match set for September, time will tell who ends up looking the part by the time they face off. One thing is for sure, it has been interesting to watch the training progress of both Hafthor Bjornsson and Eddie Hall, especially with how different each man has been approaching this fight.

We will have a pretty decent idea of what to expect from Thor, with his various exhibition fights before the big one. However with Eddie being so secretive, it means that there is still some real mystery as to how this fight will play out.