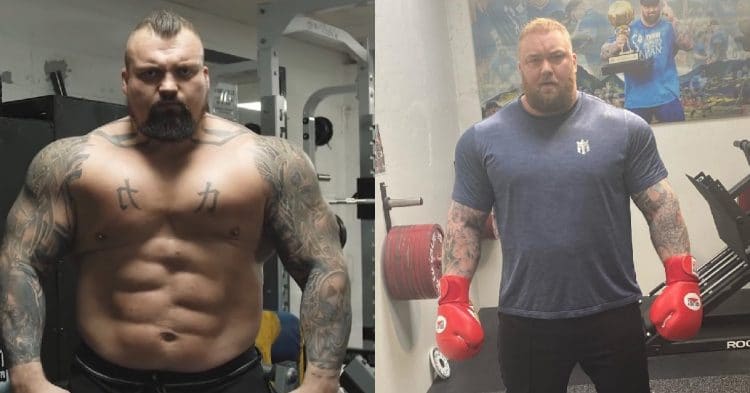 Eddie Hall and Hafthor Bjornsson have been rivals with each other for several years. This rivalry is going to be settled with a boxing match, and if Eddie has it his way there will be more than one fight.

Hall is the winner of the 2017 World’s Strongest Man winner, and up until last weekend, held the record for the heaviest deadlift of all time. That is, until Bjornsson surpassed that with a 501kg pull, albeit controversially. However, this was just the latest in a long line of differences between the two men.

Following his world record deadlift, Thor revealed that he and Eddie Hall had both been offered contracts from Core Sports, for a boxing match to settle their beef. He said he was ready, and shortly after Eddie also agreed to the fight. Moreover, he even uploaded a video of himself, signing the contract to box the Icelandic champion, insulting him the whole time.

It is clear that both Hafthor Bjornsson and Eddie Hall are taking this seriously. Eddie vowed to train harder for this than he ever has for anything else, while Thor has already begun working on his boxing. Obviously these two have a deep dislike for each other, and they are looking forward to getting their hands on each other in the boxing ring.

A lot of people may think that this beef largely comes down to the deadlift record that Bjornsson took from Hall. However, speaking in a recent interview, Eddie explained that this is about more than that. He says that he has had problems with Thor, ever since he caused controversy over Eddie’s WSM victory. That is what has led these two to the path where they will meet in the ring.

“He’s an absolute giant of a man,” Eddie said. “Given the choice I’d never want to fight Thor. It’d be a stupid choice for anyone on the planet to fight someone that size. This is more personal. It’s not about the contract, it’s not about the money offer, it’s not about the stupid deadlift feud that we’ve got going on. I think it’s the fact that he accused me of being a cheat at World’s Strongest Man 2017, and he threw all these accusations out there, that the referees were corrupt, that the events were changed in my favor, that I knew the events in advance, that the events were being changed during the contest for my favor. There were just so much bulls–t that Thor came out with, and put a black cloud over my World’s Strongest Man win.“

Hall goes on to explain that following that win, people would only ask him about Thor’s comments, which really bothered him. However, things were not always like that between these two. In fact, Eddie went on to say that he and Bjornsson used to be fairly good friends.

“I used to really like Thor, we were great friends. He used to be a really great guy, and I think there’s a lot of people that can back that up. I don’t know what’s changed about Thor, but he became a bit of a monster. Everything had to be his way. I think that really started at World’s Strongest Man 2017, with all the bad negativity about that. I think honestly, up until that point, me and Thor were fine. We got on, we talked, we respected each other.“

This type of feeling from Eddie Hall means that this fight is going to be extremely personal. There is a litany of issues that the Brit finds with Thor, stemming from a bad attitude over the years. This makes Eddie excited to step in the ring to box the Mountain.

Hall continued to explain how much this fight means to him, before concluding with a message directed at Thor.

What do you think about these comments Eddie Hall has been making about Hafthor Bjornsson? Are you excited to see these two fight?