The Strongman legend explains how he plans to defeat his foe in their boxing match next year. 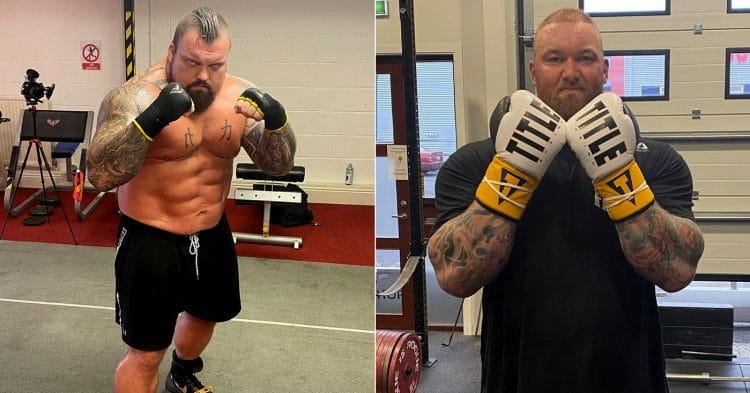 If you haven’t been living under a rock then you’re probably aware that the two former World’s Strongest Man champions Eddie Hall of the UK and Hafthor Bjornsson of Iceland, are preparing for a boxing match late next year. For them and fans, this battle of beasts probably can’t come soon enough with the drama that has been brewing between them.

Bjornsson recently talked a little about his game plan for the fight and even more recently, Hall explained how he plans to get his hand raised, in a Q&A on his YouTube channel.

Of course, he received other questions of which he picked the best ones to answer. The first one was related to how his diet has changed going from Strongman to boxing. Hall explained that he just eats to fill the sessions which is much different than when he used to eat upwards of 12,000 calories to maintain his hulking size. Although, he has shed a bit of weight which is smart on his end and will only benefit him in regards to cardiovascular performance.

Hall was asked about an ideal weight for the fight and explained that he isn’t exactly sure how heavy he’ll come in. He obviously wants to be able to fast and outlast Bjornsson, however, the latter is bigger than he is in both height and weight. So he doesn’t want to give up a lot of size, especially seeing as he’s 6’3 while Thor is a towering 6’9.

He also plans to use his natural gifts to his advantage that allows him to train harder and longer than most people. Hall even learned that he has something called the “Hercules gene” which is a deficiency in a protein called myostatin that limits muscle growth.

“I’ve been doing a lot of round work this last few weeks and I’ve been wearing a heart rate monitor, and I can work at pretty much 90% of my max heart rate constantly. My body doesn’t give up. My max heart rate is 188 and I work about 175/180 quite comfortably for three-minute rounds for half an hour at a time sometimes 40 minutes. I think that’s a massive advantage, I don’t know many athletes that can work at that sort of rate for that period of time. I think that’s down to my genetics.”

He also addressed another question about how he plans to combat the height difference. And he doesn’t exactly have a plan at the moment although he’s working with his coach to figure out a game plan.

It seems Hall is not one bit worried about Thor.

Are you predicting a knockout, if so what round?

Perhaps Hall’s most passionate response during the Q&A…

“I’m 100% predicting a knockout. In my mind, it’s going to be a first-round knockout but you just don’t know I can’t be that arrogant to say what round. All I know is I’m going to win and it’s going to be a knockout. I am for sure going to crack him the hardest he has ever been hit in his entire life across his chops and he’s going to regret ever opening his gob, that’s for sure”.

There you have it, some good insight into Eddie Hall’s game plan for the boxing match. It’ll definitely be exciting to watch and there’ll no doubt be plenty of progress updates as the date gets closer.

Watch the full Q&A below…

2018 World’s Strongest Man, Hafthor Bjornsson, is considered to be one of the best athletes in the history of strongman...