As the months tick away for Eddie Hall to box Hafthor Bjornsson, he shows off his insane physique and weight loss 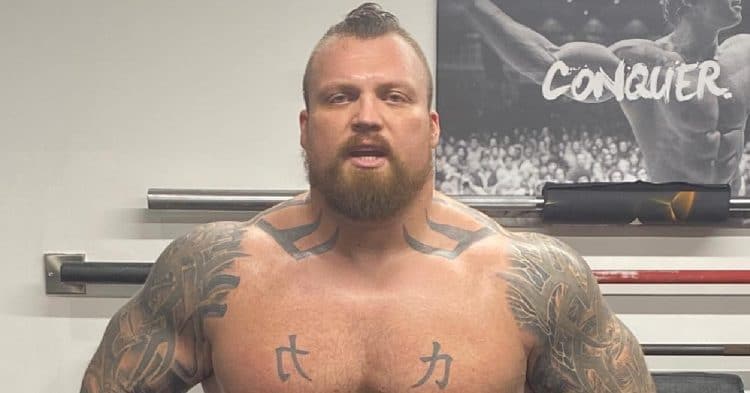 With each passing month of boxing training that Eddie Hall undergoes, he continues to look better and better. He recently checked in with an insanely jacked physique, at a low bodyweight.

You can say what you will about the idea of the boxing match between Hall and his rival Hafthor Bjornsson. Yet the one thing that can not be denied is that these men are putting everything they have into the training for this new endeavor. Eddie has been constantly providing updates of his quick hand speed and smooth technique, while Thor has been bringing in MMA legends to assist him in training.

The fight between Hafthor Bjornsson and Eddie Hall will not be taking place until September of 2021, but the Englishman has been pulling out all the stops. This intense training has been paying some serious dividends, in terms of helping him lose weight. However he recently posted an update to Instagram to show just how low he is getting. With a super defined six pack, the strongman says he weighs a mere 355lb.

It is hard to not be impressed by this transformation from Hall. In the prime of his strongman career, he was a thunderous 410lb, and now he is down to this lean weight. It goes to show how much the high pace nature of boxing helps with cardio.

Hall isn’t just focusing on his cardio either. He has been putting a ton of energy into working his technique, and harnessing his power. He even made his training partner cough up blood after one of their sparring sessions. Luckily the trainer was okay after the fact, but it was still an intense moment.

“Thor, I hope you’re watching boy because that’s going to be you in the ring coughing up your soul,” Hall said after the session.

It was also recently revealed that when Hall and Bjornsson square off next year, it will be under the MTK Global banner. This is a cool feature that adds a little bit of legitimacy to their boxing match. Being billed as the “Heaviest Boxing Match of All Time,” if these two continue on the path they are on it may not turn out that way.

There is still plenty of time before Eddie Hall and Hafthor Bjornsson face off in the squared circle. Yet with every update, things continue to look like this will be a fun experience to witness.