The 2017 World's Strongest Man champion "The Beast" Eddie Hall shows off his hands and makes his partner cough up blood as he trains for his boxing match against Hafthor "Thor" Bjornsson next year. 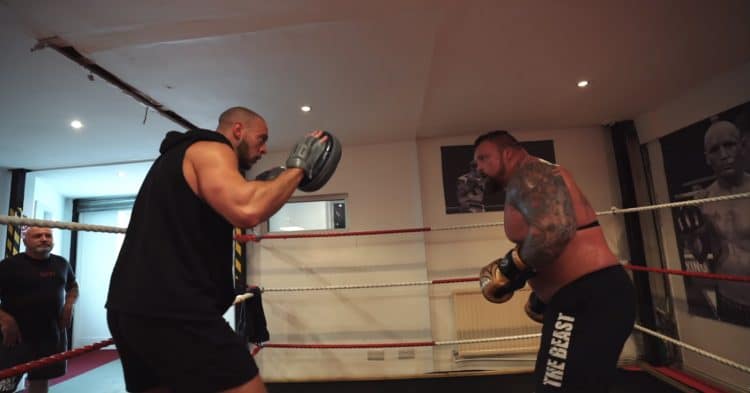 By now, it’s safe to say that former Strongman competitor and 2017 World’s Strongest Man champion Eddie Hall is a freak of nature (they don’t him the Beast for nothing). Not only has he won the highest form of Strongman competition; the UK native holds the axle press world record (216 kg/476 lbs) and the CrossFit GRACE/ISABELLE world record.

Not to mention, he never backs down from a challenge, trying his hand at everything under the sun from gymnastics to arm wrestling, Olympic sports, Navy Seal training, and more.

But right now, his focus is to smash the face in of his greatest foe and Strongman rival Hafthor Bjornsson. The latter broke Hall’s all-time deadlift record (500kg/1102 lbs) earlier this year when he pulled 501 kg/ 1104 lbs as part of the World’s Ultimate Strongman Feats of Strength Series.

Leading up to the record attempt, they had plenty of back and forth; throwing the worst of insults at each other. Then after Bjornsson broke the record, he called out Hall for a boxing match; Hall accepted, and now the two superheavyweights are on for September 2021.

The Strongman icons have been training as if their lives depend on it, and fortunately for us, they’ve also been regularly providing updates and sharing their progress along the way.

Hall recently uploaded one of his training sessions where he’s hitting mitts and he’s looking darn impressive right now; enough to make Thor worried. He’s dropped a good amount of weight and appears to have improved his speed and power. In fact, it was quite scary and not always fun for his training partner “Paddy” who really feeling it as you can see many times throughout the video.

Then his training partner strapped on some body padding and this is when things got serious. At around the 8:55 mark, Hall landed a brutal body shot that forced Paddy to his knees near the ropes where he coughed up blood. Hall was very concerned telling him to breathe, after which he told the camera person to stop filming.

Thankfully, Paddy was OK and they did an update a week later of which he explained, “I’m suffering still but I’m getting better slowly“. Apparently, he’s been waking up in the middle of the night with some pain but overall, is not doing too bad. He said that he started to feel a tightness in his chest after getting hit hard with a right in the solar plexus during the first round of training. He sucked it up but eventually, Hall’s combos would prove to be too much for Paddy during a few rounds later.

But this wasn’t the first time Hall did some damage to someone with mitts, as he hurt his trainer back in August. It’s all a part of the process though.

Afterward, Hall explained that his fitness was improving and he’s feeling really good right now. He ended with, “Thor, I hope you’re watching boy because that’s going to be you in the ring coughing up your soul“.

Meanwhile, Thor has been training very hard for the matchup as well showing notable improvements in his skills, and losing weight so that he can develop more speed and conditioning before the bout scheduled for 2021.

It’s going to be one heck of a spectacle between these two behemoths and we’ll be sure to keep you updated on their progress.