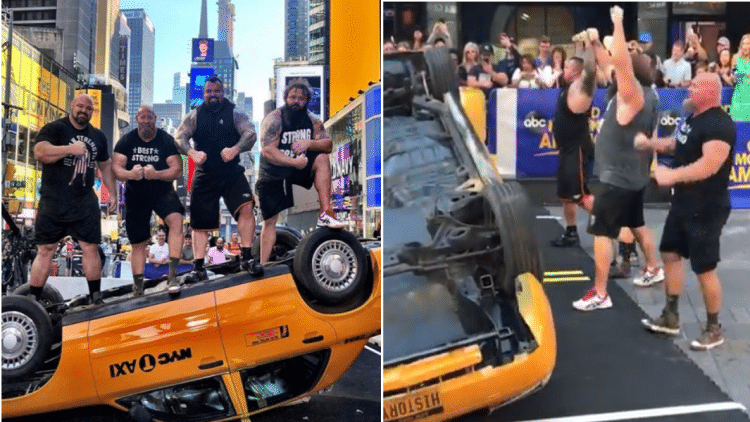 Watch as four of the world’s strongest men demonstrate their ability. Eddie Hall, Robert Oberst, Nick Best, and Brian Shaw put their strength to the test, on national television.

These four gentleman has a massive reputation behind them. Hall may have retired, but he is still as strong as ever, and a legend in the sport. Additionally, Nick Best recently broke a record for hip lifting. On the other hand, Oberst recently got a boost in attention, appearing on Joe Rogan’s Podcast. Last, but not least, Brian Shaw has recently been an inspiration, with a massive weight loss transformation.

This is just a short list of recent activities that these four have been involved in recently. Despite this, these gentlemen found time to show off their collective strength. At least, this seems to be their intention, arriving to the Good Morning America set.

Eddie Hall and Brian Shaw have a show that is airing on the History Channel. “The Strongest Man In History” will also feature Oberst and Best. Additionally, the show just came out, earlier this month. It features these four strongmen, discussing the history of strongmen, and showing off their skills.

Following the premier, these four beasts went on Good Morning America, for some promotion. While pushing the show, the group decided to demonstrate what viewers would be watching. They decided the best way was to flip an entire taxi over.

See the video below:

Also, they snapped this sweet shot, standing on top of the flipped taxi.

This is quite the spectacle, to see on such a big national television show. One thing is for sure, Eddie Hall, Brian Shaw, Robert Oberst, and Nick Best made it look easy. It is safe to assume that their History Channel show will be just as exciting.

“The Strongest Man In History” airs on the History Channel, on Wednesdays.