Get some incredible tips from the deadlift world record holder. 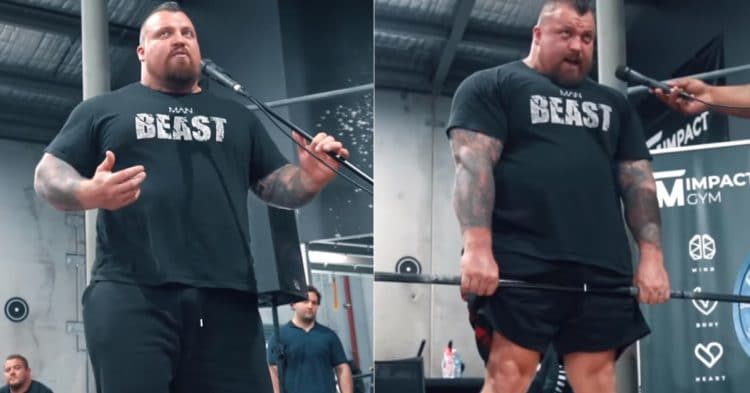 Eddie ‘The Beast’ Hall is the current all-time deadlift record holder, a feat which he accomplished in 2016 when he pulled an astounding 500kg/1,102lbs. He then went on to win the title of World’s Strongest Man just a year later (2017). So if you’re going to take advice from anyone on how to deadlift, the English Strongman legend would be a good first choice.

Hall is known for taking on challenges no matter what it is but he also regularly offers his best advice to others when it comes to lifting. So in one video, he gave his three best tips for increasing deadlift performance by up to 20%. Naturally, we’d be interested in hearing what he has to say.

And we know you heavy lifters out there can benefit greatly even if you’re already pretty good at the deadlift.

Hall started off by saying that many people think the deadlift is one of the easier lifts because you “just pick the weight up“. But that couldn’t be farther from the truth. “Out of the squat, bench and other exercises, the deadlift is the most technical. You get one foundation wrong and your lift completely goes to s–t,” he explained.

For foot position, Hall says that he uses and recommends shoulder-width plus half an inch to an inch. He had the crowd of people he was speaking to rock their body right and left as an example of how this stance allows you to be much more stable compared to being too narrow.

He also used a similar example for the positioning of the actual feet. He says to keep them straight and not pointed outward or inward. This allows for optimal balance during the lift.

“If you’re gripping the bar narrow, you’re actually making the lift a lot harder for yourself” Hall explained. It’s just not conducive to proper form when lifting maximal loads.

A wide grip allows you to better retract your shoulders which is an essential component of the deadlift. It heavily involves the posterior chain (backside of the body) so that makes plenty of sense. Another reason to avoid the narrow grip is you’re not fighting against the muscle in your chest and armpits.

Eddie Hall says that he puts vaseline under his armpits to reduce the friction of the pull. It allows him to maintain a smooth technique throughout the lift.

“At the end of the day, it’s these tiny little tips and tricks that can make a big difference to your lifting.”

Hall then showed an example of how Grip width can make a big difference for the deadlift.

Bar in relation to the body

The bar should always remain in one position, close to your body. Hall explained that if the first rep of a deadlift isn’t easier than the second, then your form is bad. He says a lot of people lift the bar over the toes which is too far away from the body. This also causes back pain, too much glute involvement, and not enough quads.

“You got to think of a deadlift as an A to B deadlift like a bench press”. If you come off that line, you’re making it harder for yourself. He says to keep the bar over the midfoot which is the perfect bar position in relation to the body.

As a result, you’ll pull the most weight possible and not waste energy which is what improper form will do. Hall says you have to trust the process.

So he gave another example of how to set up in this ideal position. He mentions that keeping the bar over the midfoot will feel unnaturally close (about an inch from the shin). But again, you have to trust that this is the correct bar to body position.

The shoulders cannot be too far over the bar either. Hall had a volunteer close her eyes and pretend they were doing the leg press. Well, she naturally moved her shoulders back a little bit into a more ideal position. “The deadlift is the leg press,” he said.

That’s all you need to do for shoulder position.

“I took that on board from Andy Bolton, believe it or it. The first man to deadlift 1000 pounds. I got no shame in telling you guys that I learned from one of the best. That’s how we get on in life, you pick up, you copy and paste. That’s what Strongman is, you copy and paste, you see someone who’s good at yoke or farmer’s, you copy their technique until you become them.

Hall added that if you perfect these three elements of the deadlift, you’ll increase it by 10-20% within a month. We’d have to say the big man gave some amazing tips that anyone can use to get a better deadlift.

Dumbbells vs. Kettlebells – Which One Should You Use?