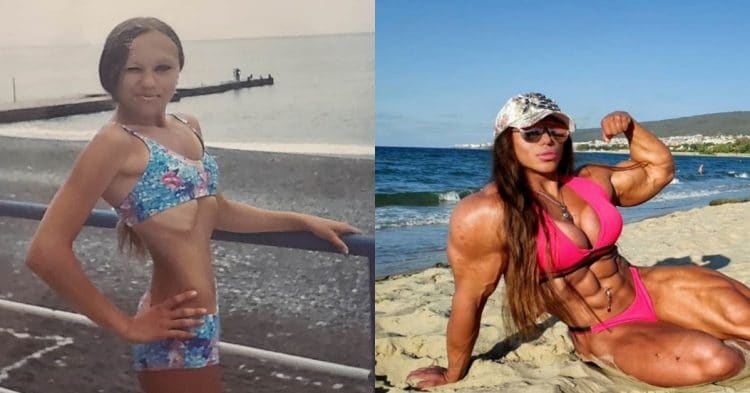 Nataliya Kuznetsova is one of the most physically imposing bodybuilders on the planet. However, as she showed recently, she was not always like this.

Kuznetsova is a true pioneer and trailblazer for women’s bodybuilding. Not only has she been an advocate for such shows as the Wings of Strength contest, but she has looked incredible at every step along the way. Although she came in second in her return to competition, this was seen as controversial, considering the massive size she had when she took the stage.

However, Kuznetsova has not always been the mass monster she is today. In fact, she recently showed as much, with a picture uploaded to Instagram. The photo shows a 14-yearv old Nataliya, who was practically skin and bones. Compared to how she looks, the scrawny teen is unrecognizable.

Compare this, to the most recent photos of Nataliya Kuznetsova, and you can plainly see the differences. Nowadays, one of her legs likely weighs more than her 14-year old self. The sticks for arms are now replaced by impressive biceps and triceps, and her exposed ribcage is now hidden behind some rock solid abs.

Kuznetsova is currently attempting to earn her chance at the Ms. Olympia contest, later this year. It is the first year in a while that this contest has been apart of the Olympia, so she certainly wants to be apart of it. She is currently not qualified for the event, but has 4 points. With another big performance or two, she will likely be able to earn her invitation to the event, this September.

Nataliya Kuznetsova continues to be an inspiration for anyone, man or woman, who has an interest in fitness. She is proof that, with enough hard work, anything can happen. As she continues to defy the odds and find success, she still remembers who she was before she hit the gym.