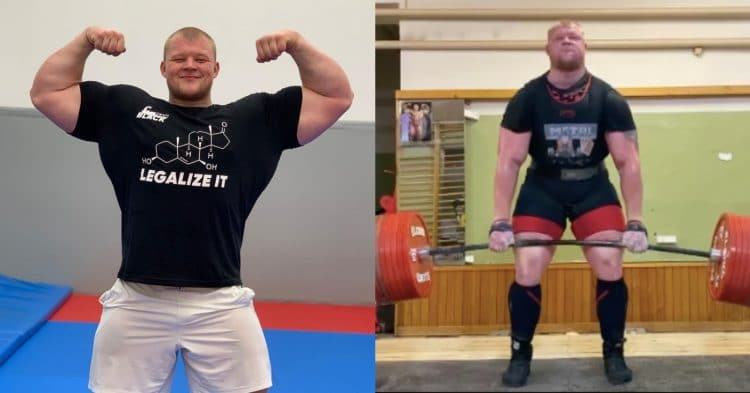 There seems to be a race to see who will be the next man to hold the deadlift world record. The Ukranian Hulk, Pavlo Nakonechnyy is proving himself worthy to be in that conversation, especially after his most recent performance.

Nakonechnyy is just one of a handful of people who are setting their sites on the deadlift world record that Hafthor Bjornsson holds. Of course, in order to get there, they each need to surpass the 501kg (1104lb) pull that the Icelandic strongman hit last May.

While he still has a ways to go, Pavlo continued his ascent towards that record with a recent performance that he shared on his Instagram. Here the Ukrainian strongman managed to lift a whopping 475kg (1047lb) deadlift, leaving those watching blown away.

This was a massive performance from the man who is known for insane deadlifting skills. We have seen Pavlo Nakonechnyy perform all kinds of insane feats with the barbell over the last several months, including a ridiculous 435kg triple that he did for two sets in April.

What is by far the craziest thing about his skills, that Pavlo is just 23 years old, meaning that this is likely far from the best he will be. The fact that he is able to move this much weight, without even sniffing his physical prime, is a mind blowing concept.

It should be noted that most of Nakonechnyy’s deadlifts are performed with just wrist wraps and a lifting belt, which is considered raw by strongman standards. That makes his 475kg deadlift, as well as this 455kg deadlift from a few weeks earlier, all the more impressive to watch.

At the end of the day, there are a lot of athletes that are gunning for the deadlift world record, with the most notable being Peiman Maheripourehir, as well as Gabriel Peña. That said, you can certainly add Pavlo to that list of aspiring world record holders, as well.

Even if Pavlo Nakonechnyy is not able to hit the world record in the next few years, which is reasonable given how far away he is compared to some of these other names, it seems inevitable that he will hold it at some point. After all, he is so much younger than the rest of his contemporaries, and his full potential has not even begun to get unlocked.