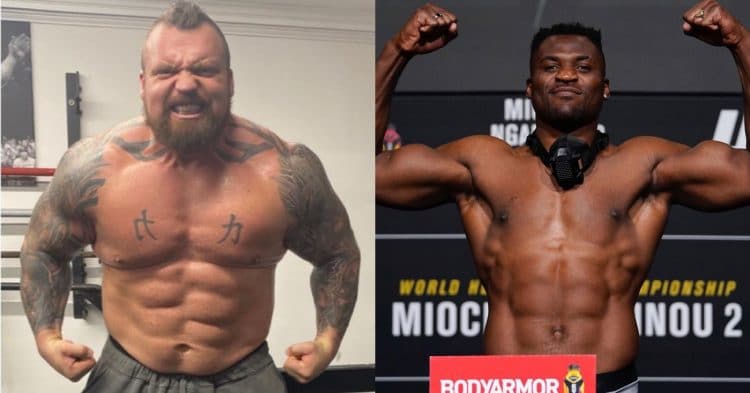 Given his sheer size, it is expected that Eddie Hall likely packs a punch. He recently put that to the test, by testing his punching power and trying to beat the world record that UFC heavyweight champ Francis Ngannou put in place.

Having made the transition from strongman to boxing, Hall has been working hard to advance the technique of his boxing skills. He has also done a lot of cardio-heavy training, leading to a solid amount of weight loss as his conditioning increases.

That being said, Eddie still weighs around 350lb, and packs a tremendous punch. However he decided to test just how hard he punches, and put the results in a video that he posted to YouTube.

In this video, Eddie Hall takes on the PowerKube, a machine specially designed to test the power of impact, primarily from punches. Heading into this experiment, the world record high score on this machine belonged to UFC heavyweight champion Francis Ngannou, but Eddie looked to change that.

These units that Hall is referring to, are comprised of a combination of power, measured in watts, and kinetic energy measured in “the squish” as Hall calls it. Combined, these average out to a Franklin unit, to determine how hard the strike is.

After getting the low-down from Mickey, who hosted the PowerKube session, Eddie got to work, trying to break the record that Francis Ngannou scored. Taking off his shirt, the former World’s Strongest Man  threw his entire force behind numerous punches, with his score hanging around an average of about 95,000-100,000, and going just under 114,000 as his best score.

After Mickey noted that this was the hardest hit he ever witnessed live, Eddie encouraged he and Paddy to give it their best shot, in order to provide context to his power. Mickey was hitting an average of 60,000, while Paddy hit around 35,000 on average.

“I haven’t got the technique that Francis has at all, so I came and took 50, 60 shots to get warmed up and get that caliber, get that swing, get the accuracy. So now that I know what I’m doing, I think I could come back and smash that, but obviously words are cheap, get it done.”

It is crazy to see how hard Eddie Hall is able to punch. Time will tell how that translates in real competition, when he faces off in the ring against Hafthor Bjornsson this September.