Eddie Hall gives an update on his bicep tear, and his thoughts on Hafthor Bjornsson's decision to face Devon Larratt as Eddie's replacement for their boxing match 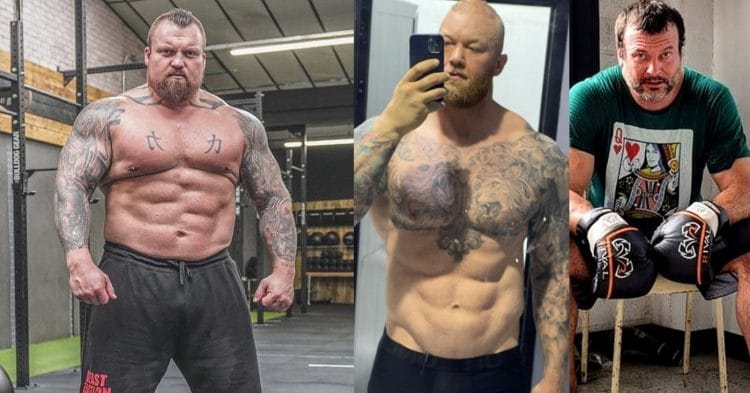 Eddie Hall was forced out of his boxing match with Hafthor Bjornsson due to a torn bicep. Now Thor will be fighting champion arm wrestler Devon Larratt, but Eddie is not sure that is a good idea.

The boxing match between Hall and Bjornsson was one of the most anticipated events of the year, in the world of strongman. Fans and athletes alike were buzzing to see how these rivals would stack up when facing each other in the ring.

Unfortunately though, with Eddie being replaced by Larratt, fans will have to wait a bit longer. That being said, Eddie revealed in a video on his YouTube channel, that he was a bit surprised to hear that Thor took this fight on short notice, against someone like Devon.

“Honestly, I never saw it coming. I will say that. It was very random,” Hall said. “Big strong guy and I know Devon, I’m sure he’s an ex-Pat and been in the army for 20-odd years so he’s no stranger to danger. Up for a scrap.

“I think Devon has had a lot more fights in his life. I’ve met him, spoke to him and trained with him. I think he’s used to that environment and that pressure of being in front of crowds with the arm wrestling stuff.”

That being said, Eddie Hall knows that it was a safe bet for Hafthor Bjornsson to take a fight with someone that has no boxing experience. However the Englishman says that this could backfire on the Mountain.

Devon has been training at TriStar Gym, where former two-division UFC champ Georges St-Pierre trains. Eddie says this, combined with the power that the arm wrestler has could spell trouble, at least in the early rounds.

“I think Devon could batter him, I really do,” Hall said. “With boxing, you’ve got to be fit or you’re f—ked. That’s the only thing that is going to let him down. He will have the aggression.

Also in this video, Eddie Hall gives an update on his own injury, and how the recovery process is coming along. All things considered, he is doing pretty well, as evident by the fact that he has returned to training.

“It’s four weeks today since I had the bicep reattached and the scar is looking nice now. It’s feeling good, I’ve got full movement back,” Hall said. “In another two weeks I’ve got a CT scan to make sure the tendon is bonded to the bone.

“I’ve got to take it easy for another two weeks at least. Once that scan has come back and says it is a hundred percent fully bonded to the bone, then I can get back to where I was pretty quick.”

As far as his training goes, Eddie Hall says that he has not taken any sort of real break from training. After taking a week to recover after surgery, he returned to action, only adjusting to the one arm as needed.

“I haven’t laid off training. I’ve been running, swimming and one armed boxing. I’ve been doing as much strength and conditioning as I can… I had one week off after the surgery.

“Yes, it has damaged my training but it is not the end of the world. I can come back from this quite quickly. I’m feeling confident I will be back to my normal self quite quick.”

It is good to see that Eddie Hall is on the mend and hopeful to return to action soon, which lines up with the idea that Hafthor Bjornsson has about their bout being rescheduled to early next year. Time will tell if the Beast is right, about the chances Devon Larratt has of beating him.