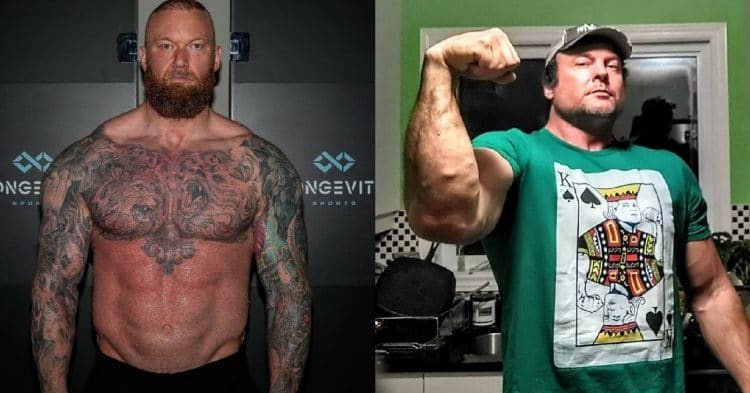 When news broke that Eddie Hall had suffered a bicep tear, fans were wondering who Hafthor Bjornsson would face in the boxing ring instead. Now it has been revealed that he will be facing arm wrestler Devon Larratt.

Fans were gutted to hear that Hall would be delaying his fight with Bjornsson with the brutal bicep injury suffered while sparring, which even required surgery. After all, the two retired strongmen have been working hard in the gym for over a year to prepare to settle their beef in the ring.

After the injury was revealed, there were a few athletes who offered their names to replace Eddie and fight Thor. In the end, it was revealed that Canadian arm wrestler Devon “No Limits” Larratt would be the man to step into the ring with the World’s Strongest Man winner.

Apparently Larratt has been training with boxing legend Lennox Lewis, to prepare for his fight with Hafthor Bjornsson. While he has no boxing experience, he appears to have some special forces training, which is said to going to be of aid to him in the ring.

As far as his arm wrestling career goes, Devon is an experienced competitor, having competed since 1999. He holds a professional arm wrestling record of 53-8, in his near two and a half decades of competition.

Bjornsson will have a height and reach advantage over Larratt, as well as having youth on his side, being 14 years younger than his foe. However this bout is not one with bad blood fueling it, as these two have actually been aquatinted, with Devon even meeting Thor and taking pictures before the Icelandic strongman’s exhibition fight with Simon Vallily.

There is no doubt that Hafthor will be the one with the experience advantage as well when they meet on September 18th, having taken two exhibition boxing fights in order to properly acclimate to the boxing world, before his would-be fight with Eddie Hall. On the other hand, with Devon training with Lennox Lewis, he is sure to learn a lot, even in the short time he has to prepare.

Officials felt like it made no sense for Hafthor Bjornsson to face another strongman that was not Eddie, which explains why the likes of Robert Oberst and others did not get their calls for action met. That being said, hopefully Hall is able to heal quickly, which seems to be the case, and the two can be rebooked to fight soon.

How to Squat and Build Better Legs with Bad Knees