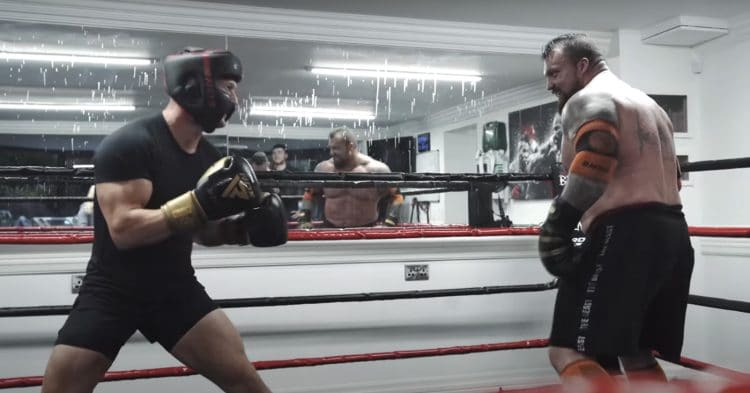 Since he transitioned to boxing, strongman Eddie Hall has taken every opportunity to showcase his power. The 33-year-old famously tried to break UFC champion Francis Ngannou’s record for the most powerful punch ever recorded and came mighty close back in June. After testing his power against celebrities like Peter Andre, Nile Wilson, and Ryan Terry, Eddie Hall recently stepped into the boxing ring with Matt Morsia aka MattDoesFitness.

The video of this training session was uploaded on Eddie Hall’s YouTube channel. Hall started the video by jokingly clarifying that it was Matt Morsia who asked for this. Just in case anything went wrong! Matt admitted to having absolutely zero knowledge of boxing. Following this, Eddie Hall walked his new partner through a few basic drills to build his confidence.

Hall then invited Matt to punch him in the body which, not surprisingly, didn’t go so well for the novice. The most interesting part of the video then followed as Matt Morsia braced himself with protective gear. Eddie Hall started punching Matt in the body and later targeted his chest with immense power until it was enough. Matt admitted that the ones on the chest hurt a lot more than the punches to abs.

“There’s a lot of people watching this that will take a lot of gratification when you just punching me loads.” Matt Morsia said.

Courtesy to Eddie Hall’s YouTube channel, you can watch the video here:

Eddie Hall has recently returned to training after a successful bicep surgery that forced him out of his September 18th boxing debut against archrival Hafthor Bjornsson. However, the pair has kept the intrigue surrounding the fight alive. They are expected to face each other in early 2022 if things go well.

Eddie Hall’s training videos with celebrities have not gone unnoticed by Hafththor Bjornsson. Thor made an appearance on the Impaulsive podcast with YouTuber-turned-professional Boxer Logan Paul. While talking about Eddie Hall in light of his recent victory over Devon Larratt, Thor claimed that Eddie Hall’s bicep injury was an excuse to find a way out of the scheduled flight.

He went on to make fun of Eddie Hall for punching celebrities and added that more Hall delays the fight, it will be easier for Thor to beat him as he is constantly training and adding new wrinkles to his game.

Both Hafthor Bjornsson and Eddie Hall carry immense power and fan following. Irrespective of the build-up and trash-talking, a fight like that is bound to be a huge affair. Who do you think wins when they finally settle the beef inside the ring?