"The Beast" Eddie Hall used a gymnast to test his one punch power in a recent training session. How did that turn out?... 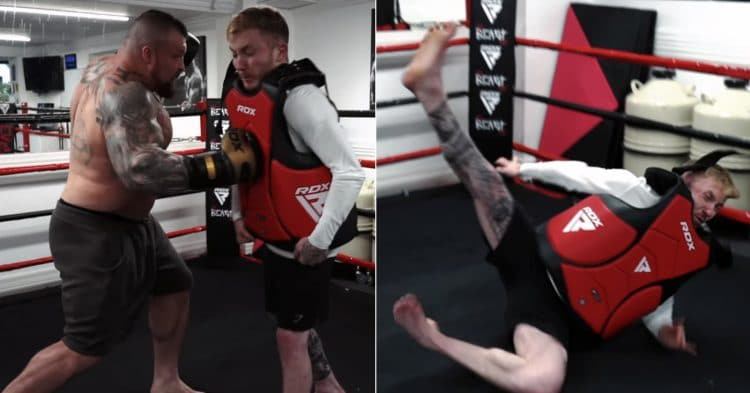 Once upon a time during a training session, retired gymnast and bronze medalist Nile Thomas let one of the most powerful humans in history named Eddie Hall punch him in the stomach. Keep reading to see how it went down.

A former World’s Strongest Man champion, “The Beast” Eddie Hall now has his sights on the highly-anticipated upcoming boxing match with Strongman foe Hafthor Bjornsson. He’s made leaps in bounds in his skillset and his conditioning is top-notch right now. Whether or not he’s ready to take on a 6’9″ behemoth and also former World’s Strongest Man winner known as “Thor”, well, we’ll just have to find out in September.

But for now, the British Strongman is putting his skills to the test during training sessions and from what we’ve gathered, he may be the favorite due to already having a little experience with boxing training before the bout was confirmed last year.

Olympic Gymnast Nile Wilson joined Hall for a back and Strongman training session that was posted to the latter’s YouTube and from the thumbnail and title, one could only wonder how that turned out.

So before the punching session, they provided physical stats so that viewers could see the massive height and weight discrepancy between the two.

They didn’t waste much time and wanted to get straight into it. Wilson had the opportunity to punch Hall in the stomach first though, so he strapped on gloves and this was interesting.

He started with about 20 percent power which was nothing for a 350 lb man with rock-solid abs. Hall told him to use 40 percent power and while it was the same result, Hall decided to let out a fart right before impact and they had a good laugh.

They tried again at 50 percent but the attempt was delayed due to the unpleasant stench surrounding Hall. But eventually, he hit him with 50 percent and it didn’t even faze the big man.

Next, Wilson tried 70 percent power and Hall was still fine. The latter then told him to go ahead and use all of his power. A clip of a Jackass stunt played before the attempt but it was hardly comparable as Eddie stood there like nothing happened.

Wilson was curious to know if his punch was decently powerful and while it wasn’t the weakest hit, Hall does train specifically to be able to take blows to the body.

“For my training, I’ll hang on a bar and my training partner will smash me in the gut,” hall said.

So Wilson put on his headgear and they hopped into the ring for a little sparring where it was obvious that Hall roughed him up a bit even knocking him to the ground, but it was all in good fun.

Then it was Wilson’s turn to get punched by Hall but he made sure to put on a body bag/foam suit because with roles reversed, the outcome would not be the same.

Hall started with a jab that sent Wilson straight to the other side of the canvas.

“My brain hit the back of my head,” said the former Olympic gymnast.

He took another punch and although he stayed on the feet, the force was hurting his head.

So like they did when Wilson was punching Hall in the gut, the latter started with 20 percent power and increased his power in twenty percent increments.

Eighty percent send him into flight mode and Hall can be heard saying, “you actually took off, that was pretty impressive.”

Wilson was not interested in feeling 100 percent of Eddie Hall’s power as he’s already taken enough of a beating.

But the scary thing is Hall said he could have hit a lot harder than that and put a lot more emphasis into it.

This wasn’t the first time the behemoth punished a mere mortal during training though. He, although, not on purpose of course, actually made his trainer partner “Paddy” cough up blood while hitting mitts last year. At least Wilson didn’t get that kind of treatment.

You can watch the full session below…