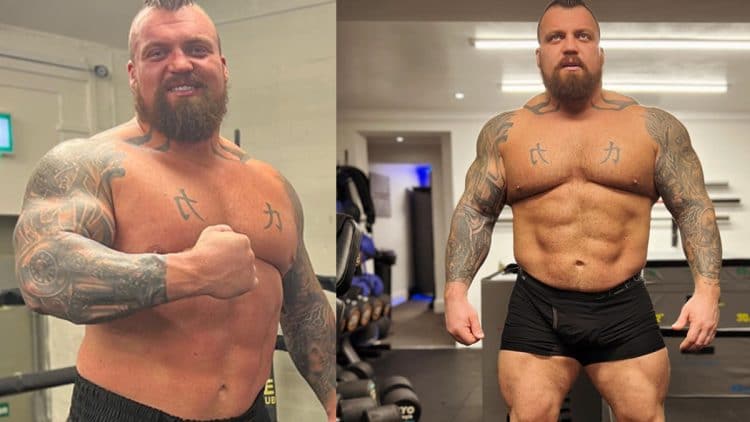 Eddie Hall’s training camp for his scheduled boxing match against archrival Hafthor Bjornsson is entering into its last phase. Hall and Bjornsson are bitter rivals since their days as competitive strongmen. The rivalry has crossed over into the sport of boxing. The strongmen-turned-boxer duo will settle their beef in a six three-minute rounds boxing match scheduled to take place on March 19th. Eddie Hall is sharing the details of his training and current schedule in ‘The Desolation of Thor’ vlog series on his YouTube channel.

In the ‘first leg of the journey of the desolation of Thor’ or the first episode of the vlog series, Eddie Hall shared his travel plans to Dubai from Manchester. The much-awaited boxing match will take place in Dubai. Many athletes find it difficult to acclimatize to the harsh climate. Hall chose to fly two weeks in advance to acclimatize and settle in Dubai, predictably to avoid compromising his performance on the fight night.

Eddie Hall is currently recovering from a chest infection and stated that he needs to recover completely in order to train cardio before the fight. Reaching Dubai in good spirits without fatigue or discomfort was the primary goal at the beginning of the journey.

“I’m recovering from the back end of a bad cold. You can tell it’s on my chest. I just want to chill and get this cold out of me. I’ve got two weeks to get it out and get some good cardio in before the fight next week,” Eddie Hall said.

Eddie Hall shares his first day in Dubai, reveals he got concussed during training recently

In the second episode of the vlog series, Eddie Hall shared the happenings of his first day in Dubai. Hall started the day with grocery shopping to make sure his diet was taken care of. Hall is staying at the famous Meydan hotel that abuts the famous Meydan racecourse in Dubai. While giving a tour of his hotel suite, Eddie Hall shared the plan of action for the weeks leading up to the fight. Hall said:

Eddie Hall also stated that they’re trying to take the power off from the punches during a sparring session. Hall revealed that he might have suffered a concussion due to a shot from his main training partner he calls ‘Big Red’ a few weeks ago and said that it took him about three days to recover from that.

“I think I’ll do a couple of sparring sessions but try and keep the power down… Big Red hit me that hard the other week. He actually shot one of my eyes down. So (the left) pupil went tiny and the (right one) stayed the same. He gave me a concussion basically and I had a bad head for about three days,” Eddie Hall said.

Eddie Hall’s first workout in Dubai consisted of swimming drills. He insisted that swimming is a high-intensity workout that requires tremendous control on breathing and these attributes translate well to boxing. He stated that it is a primary reason why swimming is an integral part of his boxing training.

As revealed in the first episode of the vlog series, Eddie Hall is recovering from a chest infection. He added that in addition to improving the boxing performance, swimming is a great way to get rid of chest infection and open the airways.

“I’ve had a bad chest infection and from my experience, the best way to get rid of it is to get in the pool and do a hard swim. When you hold the breath and gasp for air, it helps to clear the airways. It’s a great way of opening the lungs up and loosening the body,” Eddie Hall said.

‘The Beast’ is acclimatizing to the harsh Dubai climate

Eddie Hall is trying to normalize his routine since day 2 of his stay in Dubai. Hall started the second day with a goal to loosen up the body a bit more and get used to the change in time zone. The day consisted of cardio training and sunbathing.

Eddie Hall did his first bit of on the treadmill and had a hefty breakfast. Later, he performed a few swimming drills and shared his expectations from the swimming drills:

“Woke up feeling alot better, chest is feeling good energy levels are back up. So uh we’ve already done a little bit of a sort of a lunging walk outside, now i’ve come to do 15 min of treadmill , so six miles an hour. I’m gonna do… I don’t know how many sets of four laps… Four laps is a 100 meters and I aim to get it done in about one minute 15 seconds. I’m gonna do probably eight times four laps. That equates to 24 minutes which is exactly six times three-minute rounds with the rest periods. So basically, 24 minutes is the most time I’ll be fighting for in the ring.

Both Eddie Hall and Hafthor Bjornsson have endured the hardships of boxing training and prepared themselves for the fight. It will be interesting to see how the fight plays out when the retired strongmen stand across the ring on March 19th.