"The Mountain" is taking over the boxing ring against Eddie Hall in March. 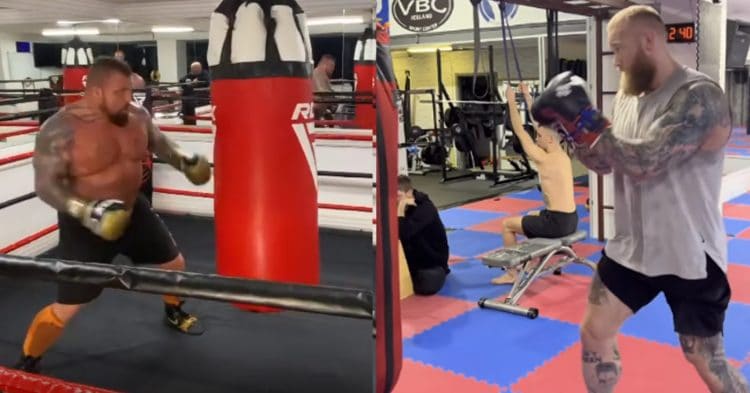 Strongman Hafthor Björnsson looks to be in tremendous shape ahead of his showdown with fellow World’s Strongest Man, Eddie Hall. Ahead of the blockbuster fight, Björnsson took to his Instagram page confirming the fight while showing off his conditioning.

Hafthor Björnsson and Eddie Hall have been linked to a match in “the sweet science” for some time. As both men are known for promoting on social media, trash talk has certainly escalated in the last few months. The anticipated match-up is being declared as the ‘heaviest boxing match in history’. Last October, Eddie Hall challenged Hafthor Bjornsson to accept a $100,000 wager over the contest for charity.

However, Björnsson countered with a $200,000 charity donation win or lose. Following the counteroffer, it appeared Eddie Hall would accept the terms except wanted the loser to pay an additional million dollars. Suffice to say, Björnsson wasn’t interested in the offer. Instead, Björnsson suggested that the loser should be forced to get a tattoo of the winner’s name on their body — which Hall accepted.

While their initial contest was put on ice after Eddie Hall sustained a bicep injury, it appears the fight is back on as Björnsson took to his Instagram page to show off his physique and promote the boxing match.

“March it is. Fight is on. Let’s fucking pray Eddie doesn’t back out again!!! 😂😂” Hafthor Björnsson shared.

Hafthor called out Hall after his Fight Night 3 victory. The 2018 World’s Strongest Man managed to earn a TKO victory in his first professional fight against Devon Laratt last year in Sept. Of course after the contest Hall had choice words for the Game of Thrones star. In essence, Hall said that Hafthor was terrible at boxing and that he would defeat the former Strongman with one arm.

With steady improvements in the gym, both competitors have made drastic changes to their physiques. Both athletes have appeared thinned down with noticeable adjustments in their conditioning in recent physique updates.

RELATED: Strongman Eddie Hall Invites An ‘Average Joe’ To Try His Boxing Workout And Diet For a Day

While preparing for his upcoming fight with Hafthor, Hall admits he lost 77-pounds since no longer training as a Strongman. Hall is leaned down compared to his old physique though the WSM winner admits that he packed on a few extra pounds over the holiday, but still had a chiseled physique.

En route to getting ready for the marquee fight, Hafthor has received help from some notable names in the field of mixed martial arts. “The Mountain” took his talents over to train with former UFC champion Bas Rutten and worked on his stand-up game. Despite having little experience in combat sports, Hafthor is on the right path to developing an impressive boxing skill set.

With Hafthor confirming the boxing match for March, the two combatants are likely turning up the heat in training to assure they come to fight in peak physical condition. Given the shape of both former Strongmen competitors, the excitement behind the boxing match is building quickly.