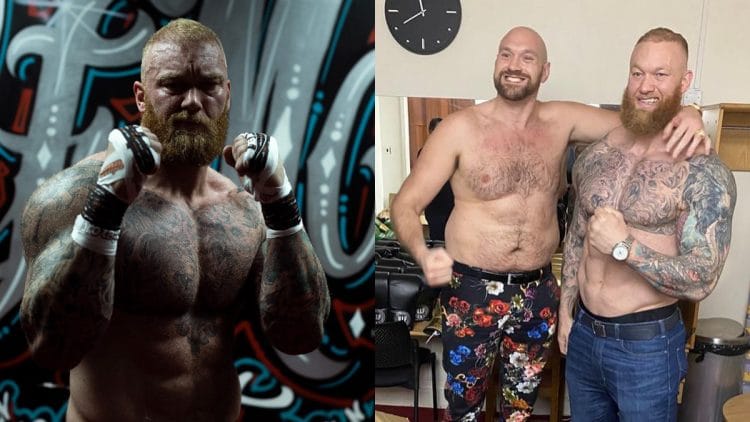 The highly anticipated boxing match between Hafthor Björnsson and Eddie Hall is expected to take place on March 19 in Dubai. Björnsson’s coach indicated that Thor has stopped every pro boxer he’s trained with in preparation for Eddie Hall.

Scheduled to take place in just over a week, the contentious saga between Thor and Eddie Hall will finally reach its epic conclusion. The beef between the two former Strongman stars began in 2017. Björnsson voiced that he was robbed by Hall of the 2017 World’s Strongest Man title. Then, tension escalated when “The Mountain” broke Eddie Hall’s all-time world record by deadlifting 501kg in 2020, which bested Eddie’s previous record by two pounds.

While the fight was supposed to happen years ago, Eddie Hall suffered a bicep injury that postponed the boxing match. In the meantime, Hafthor opted to compete anyways and faced an arm-wrestler in Devon Laratt. The fight didn’t last long as Thor scored the first-round knockout in his professional boxing debut. Both men have undergone physical transformations to acclimate their bodies to boxing. According to Björnsson’s coach, Billy Nelson, Thor is entering the boxing match with heaps of momentum.

Scottland’s Billy Nelson shared some of the progress the two have made on Hafthor’s YouTube channel and believes Eddie Hall is in for a huge shock.

“Let me just say all the professional boxers he has sparred he has stopped every single one of them. Eddie you are in for the shock of your life pal.” Billy Nelson shared.

After Eddie pulled out once before due to injury, Thor is ready to see which former Strongman has applied the new skills they’ve learned in boxing.

“I am super excited to go to Dubai, everything is coming together. A lot of people are commenting online saying ‘what is Eddie’s next excuse going to be next?’ Thor asked.

“I hope that he is not going to pull out of this fight again with a new injury, Eddie we are this close just train smart, remember to rest and don’t get injured. Honestly it wouldn’t surprise me but I would be f****** f****** disappointed because I want to beat your a**. Hafthor warned.

“You can’t do that man for the fans and for the people. Thor continued. He actually said last time that he was willing to fight injured so there is no excuses now Eddie.”

Ahead of the marquee fight, Björnsson has lost a considerable amount of weight to facilitate a smooth transition into the new sport. While the Game of Thrones star has been focused on agility and volume, it seems Eddie Hall is more concerned with size and power. In the lead-up to the contest, Hall has mentioned that he will enter the bout at 343lbs and plans to deliver fight-ending power.

In a recent vlog Eddie started to document his fighting journey, the 2017 WSM admits that he’s recovering from a chest infection and a possible concussion sustained during training. Despite it hampering his health pre-fight, Hall believes swimming has helped him get back on track for the big event.

RELATED: Hafthor Bjornsson Admits Being ‘Fatigued’ With Training Ahead Of The Eddie Hall Fight

The fight is looming large and many people are curious to see how much the recent ailments will affect Hall’s fighting abilities. After hearing that Hafthor is dropping pro boxers, it appears the titan is well-adjusted for his fight against fellow Strongman Eddie Hall.