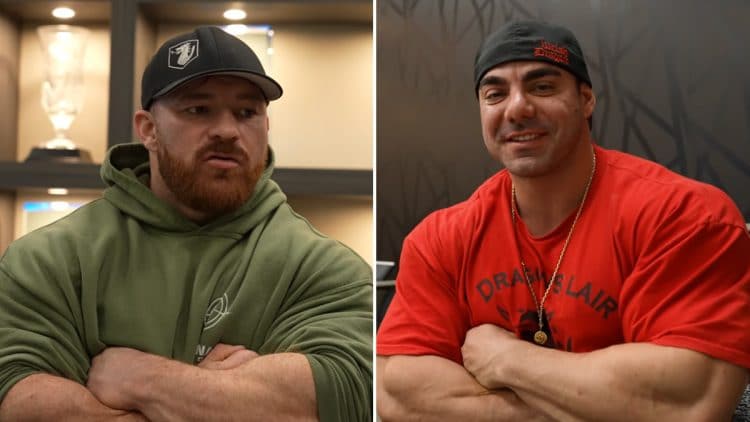 Brazilian bodybuilder Rafael Brandao recently joined fellow competitor Dominick Cardone Jr. and seven-time Olympia 212 winner Flex Lewis for an intense back workout. Brandao is currently preparing for the 2022 Arnold Classic South America. The event will take place from April 22nd to 24th at the Expo Center Norte in Sao Paulo, Brazil. Ten weeks out of the competition, the Brazilian joined Flex Lewis at the Dragon’s Lair gym in Las Vegas, Nevada for the back workout.

At the beginning of the video, Flex Lewis stated that training with young competitors like Rafael Brandao and Dominick Cardone keeps him on his toes and help him push his limits. With that, the trio headed to the section of the gym called The Astronaut’s Showroom which had all the equipment needed for the crushing back workout.

Rafael Brandao and Flex Lewis go through the back workout

The bodybuilder trio started the back workout with the single most important bodyweight movement for back – the traditional pull-ups – to work the latissimus dorsi. Flex Lewis and others performed three sets each to failure. Next, they performed high-rep supersets of elevated-seat cable rows and smith machine elevated-feet inverted rows. Cable rows work several muscles in the back that include latissimus dorsi (middle back), rhomboids (between the shoulder blades), trapezius (neck, shoulders, and upper back), and also the biceps brachii (front of the upper arm).

After completing the first superset, Flex Lewis and others went on to perform the next superset that consisted of standing low cable rows and the incline bench dumbbell rows to wrap up the workout. Standing low cable rows additionally work the upper and lower arms along with the lower and middle back. On the other hand, incline bench dumbbell rows work the upper back muscles and lats. Performing the rows on an inclined bench helps target the lower lats with biceps.

Overall, the entire back workout session consisted of the following movements and targeted each and every muscle in the back:

James ‘Flex’ Lewis is a Welsh IFBB Pro bodybuilder that competes in the 212 division. At 29 years of age, Flex Lewis became the inaugural 212 division winner at the 2014 Arnold Classic. He is best known for his seven consecutive Mr. Olympia 212 wins. He won the titles from 2012 to 2018 and has not competed professionally since the last win. Flex Lewis is the only professional bodybuilder to win the prestigious Mr. Olympia 212 title seven times.

In 2020, Olympia President Dan Solomon extended the invite to Lewis. However, he withdrew from the competition to get stem cell treatment for a shoulder injury.

In 2021, Lewis was supposed to make an appearance on the Olympia stage in the Open Pro division. However, the 38-year-old revealed that he and his wife were trying for another child and announced his withdrawal from 2021 Olympia but reiterated that he was not retiring from the sport.

Recently, Dan Solomon and Jake Wood visited Flex Lewis at the Dragon’s Lair gym. While the purpose of the visit is not known, there is room to believe that Lewis could have received an official invite from them to compete at the 2022 Olympia.

Rafael Brandao is a Brazilian professional bodybuilder from Brazil and competes in the IFBB Open Pro division. Brandao’s physique is not quite as massive as some of the other elite Open Pro bodybuilders. However, he has an incredibly aesthetic physique and great genetics to compensate for that. Brandao made his professional bodybuilding debut with an eighth-place finish at the 2017 San Marino Pro. He has competed in a total of ten professional competitions so far.