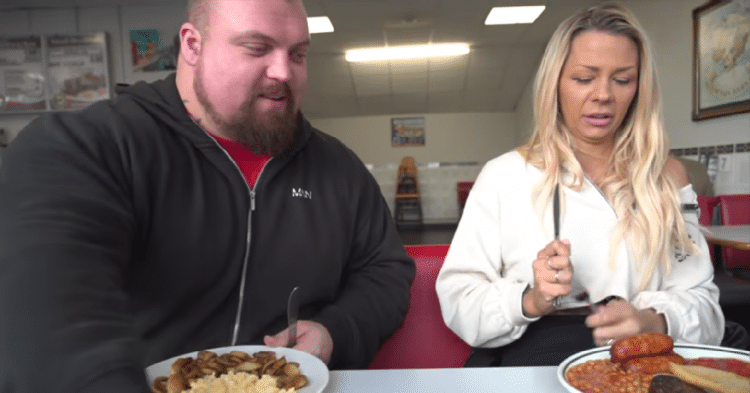 As an elite-level strongman, Eddie Hall eats a ton of food. However he recently decided to swap diets with his (rather slim) wife, Alex.

Hall is one of the most accomplished strongman athletes the world has ever seen. As such, like many other top tier athletes, he has an unbelievable diet, which he is very strict on. After all, it takes an awful lot of calories to achieve some of the feats of strength he has done over his career.

Nevertheless, Hall has been know to enjoy having a bit of fun with his diet. He is known to try doing various eating challenges, and did so again in a recent video to his YouTube channel. Only this time, he decided to involve his wife in the challenge, too.

As he explains in the start of the video, Eddie Hall and his wife will be swapping diets for the day. So whatever Eddie would eat and drink, Alex has to eat, and vice versa. What this leaves is Alex eating around 7,000 calories, while Eddie enjoys a measly 1,200 calories. Furthermore, Alex will be breaking the vegetarian diet she has followed for the last nine months, while Eddie switches to no meat.

The first meal is breakfast.

For their first meal of the day, Hall orders a Full English breakfast, consisting of sausage, eggs, bacon, beans, and toast. He also adds some black pudding, and coffee to the order, rounding out at an estimated 1,000 calories. On the other hand, Alex goes for a much simpler 2 eggs with mushrooms, and Earl tea, for around 250 calories.

Already the look on Eddie’s face spelled the worries of a serious lack of caloric intake. However Alex tried to convince him that he will appreciate the vegetarian diet. Although Eddie is less than thrilled.

“No, I’m going to wake up tomorrow and I’m going to anorexic,” Hall joked. “Literally, I’m going to look like one of those skeletons in Indiana Jones, when they find them in the cave, and they’re just skeletons with a white beard and white hair. That’s going to be me tomorrow.”

Eddie and Alex suffer through their respective breakfasts, finally finishing up the food. Then they head to the gym for a workout, before what would normally be Eddie’s first snack of the day. But first, Alex gets to enjoy the shake her husband takes before exercising, brining her calories to about 1,280.

Around halfway through the workout, Hall feeds his wife strawberries. Then, following the workout, he prepared her another protein shake, while he drinks a workout powder that Alex usually enjoys. This brought their calorie totals to 350 for Eddie, and 2,010 for Alex.

Then it’s time for the next meal.

The pair stop into another restaurant for lunch, where they again order and swap meals. Eddie comments that he never drinks alcohol, as Alex orders a glass of wine for him to drink. On the other hand, he orders a big bottle of distilled water for Alex to enjoy.

When it comes to their food order, Eddie Hall orders a mackerel patty for an appetizer. For his main course, he ordered a 16 oz. t-bone steak, with fries, onion rings, garlic bread, and seasonal vegetables. This is a stark contrast to the pulled barbeque mushroom toast, and vegan beetroot wellington, which Alex orders.

Eddie is really starting to struggle with hunger at this point, while Alex is dealing with the opposite problem. Nevertheless they persevere, and move on to their dinner. Both of them are not enjoying themselves at all.

Eddie Hall and his wife go home for dinner, where he cooks up some fajitas, spicy chicken, tortillas, mayonnaise, and cheese. They explain that she would normally only have one wrap, which is what Eddie does. On the other hand, they agree that Alex will eat five wraps to conclude their dinner, before enjoying cheesecake for dessert.

When it was all said and done, Eddie Hall ate a measly 1,150 calories, while his wife had a whopping 7,380 calories. It is hard to tell which one of them struggled the most with this challenge. Either way, they did it and it was wild from start to finish.