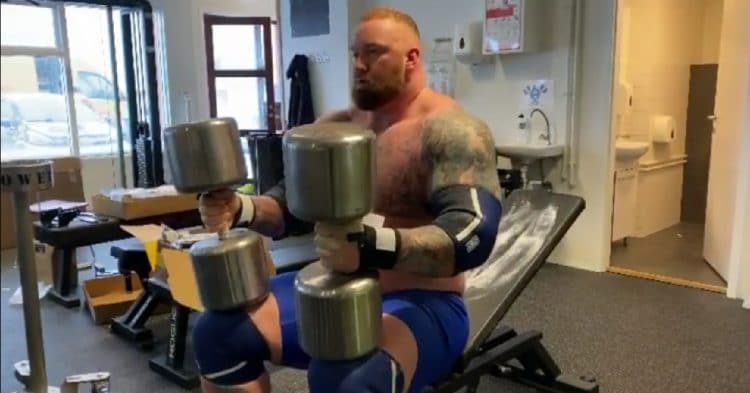 Thor Bjornsson has been tearing up the weight room recently, putting in some hard work. He’s back at it again, setting a new personal record along the way.

Bjornsson has been making some noise in the leadup to the Arnold Strongman Classic.  He has been putting in some serious time in the gym, and breaking his PRs at nearly every turn. As a result, it would appear that the former World’s Strongest Man is looking stronger than he has ever been.

However It seems that Bjornsson is not quite finished blowing minds in training. A recent video to his Instagram showed him setting yet another personal record. This time, it was by crushing a 220lb incline dumbbell press, for six reps. He looked unstoppable in the process, too.

Take a look at the epic performance:

Hafthor absolutely annihilated all six of those reps! This set came just a few weeks after Bjornsson hit an unofficial world record for his deadlift. This is the video of him hitting that gigantic 1058lb pull:

Heading into the 2020 Arnold Strongman Classic, Bjornsson is seemingly only getting better. Despite how storied his career has been, and the accolades he has already captured, he seems to be turning a new corner. It will be exhilarating to see how this translates to competition, especially considering the steep list of competitors he will be going against. In particular, he will be going against current World’s Strongest Man Martins Licis, who previously got the better of the Mountain.

Whether or not Thor Bjornsson can score a third straight victory at the 2020 Arnold Strongman Classic remains to be seen. Nevertheless, he really seems to be taking things to the next level in terms of training, so all things seem to be pointing in the right direction.