The Fight Is On!

Well, well, well… what do we have here! This is what happens when an unstoppable force meets an unmovable object, The Beast and The Mountain. Two of the biggest alpha males and two of the strongest humans on the planet are seemingly headed to a boxing match that will settle an old rivalry.

This all began when Eddie Hall was doing a live Q&A session when a fan asked him if he would be willing to box Hafthor Bjornsson.

Eddie, being the type of guy to never back down from a challenge and being a former bouncer prior to his Strongman career, said yes. He, of course also said, that in his opinion he would beat the ever-loving life out Ser Gregor Clegane.

All this didn’t sit very well with Hafthor Bjornsson and he laughed off Eddie’s claims that he would beat him and pointed out that the size difference he has over the man known as “The Beast” would be too much and that it would be a tipping point for his favor.

As I mentioned above, Eddie Hall doesn’t back down from challenges. It would be safe to say that if he ever backed down from a challenge, he would have never been crowned the coveted title of “World’s Strongest Man” and would never be able to deadlift the biggest weight ever lifted by a human being.

So, naturally when he did a recent “Q&A” session for his youtube channel the topic of him and Thor boxing at a certain point in time came up again. Eddie sarcastically laughed off Hafthor’s claims of him being too small for him and that he would lose this hypothetical match up and said that if Thor really is “game” Eddie is ready to be the first man to chop down a Mountain with his hands.

Eddie, however, clarified a few things:

1. He has zero beef with Hafthor these days. As far as he is concerned that is all a part of the past, and his rivalry with Hafthor has ended. They won’t be liking each other’s pictures on Instagram anytime soon but they have some sort of mutual respect for one another.

2. Since he has zero rivalry and emotional motivation to step inside a ring with Hafthor, this potential clash of titans would have a smart business deal that would see both men earn a lot of money. Perhaps a special event on a future “Giants live” event?

3. Hafthor said that he accepts the fight but he first has to take care of business in the Strongman world and that if they clash, it’s gonna be 2021 the earliest because Thor would take some time off to properly train for this clash.  Which is something that Eddie completely agreed and supported Hafthor on, saying that if “…he(Hafthor) wants to finish off what he has to do in Strongman and take a bit off time off and train for it. He said he wants a year to train for it, that’s fine. I’m ready to go now, no problem…so I’m happy to work on his terms.”

If all of that wasn’t evidence enough that the two will fight, Hafthor already responded to Eddie on the video. 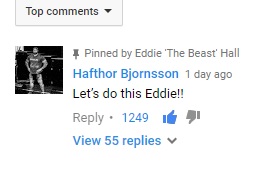