Felipe Franco was diagnosed with an acute inflammation of the appendix 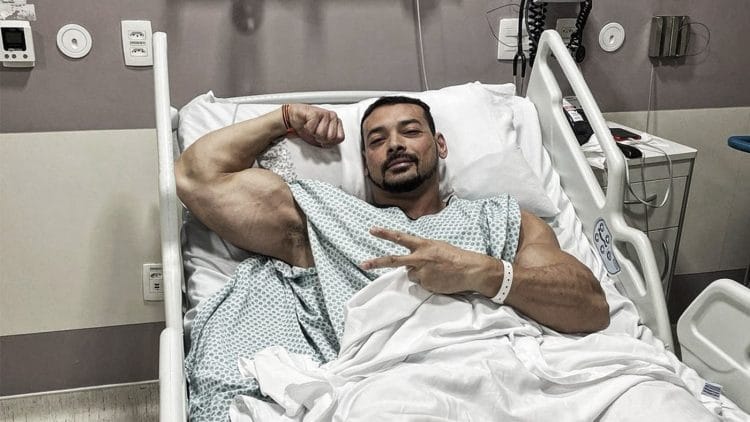 Bodybuilder and entrepreneur Felipe Franco is recovering in the emergency room of the Sao Camilo hospital in Portugal after an unexpected surgery. The 39-year-old IFBB pro bodybuilder shared his account in an Instagram post and assured everyone that the surgery was a success.

Felipe Franco shared his post-surgery photo in the Instagram post and shared a detailed account of the incident in the caption to his post. Felipe explained that he felt immense abdominal pain and couldn’t remember anything after fainting unexpectedly and hitting his head.

He then rushed to the Sao Camilo hospital’s emergency room for a checkup. However, a CT scan revealed an acute inflammation of the appendix and the doctors performed emergency surgery on Felipe Franco to avoid further damage. Franco is currently recovering at the hospital. He thanked the medical team for the successful execution of his first-ever surgery.

“Last night to tonight was not a good one, really bad abdominal pain and thought it was just gases at first. I came to the @hospitalsaocamilosp ER in a hurry after an unexpected fainting that hit my head and didn’t remember anything. After the CT scan, an acute inflammation of the appendix was found. And here I am, post surgery in recovery, it was a success. It was all so fast that I didn’t understand anything. I wasn’t to thank all the professionals at @hospitalsaocamilosp who were very skilled in my first surgery in my life, thank you. You guys are great #FF vlw the strength guys,” Felipe Franco wrote in the caption.

Born and raised in Brazil, Felipe Franco gained interest in bodybuilding at 17 years of age and turned towards professional bodybuilding after completing his graduation in physical education.

Felipe made his professional bodybuilding debut with a runner-up finish at the 2014 Prestige Crystal Cup Pro. However, he competed in Mr. Olympia the same year and finished in the top 15. Franco competed in a total of eleven meets throughout his professional bodybuilding career and also won gold medals at the 2016 Europa Dallas and 2018 Los Angeles Grand Prix in the IFBB Men’s Physique class.

Felipe Franco is one of the most dedicated individuals who epitomizes the importance of consistent hard work and discipline. Fitness Volt wishes Felipe Franco a speedy recovery and a healthy life.