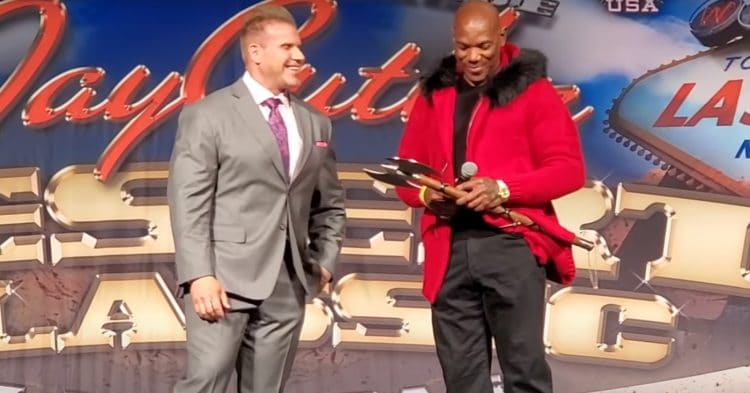 There can be no denying the fact that Flex Wheeler has shown an unreliable amount of courage over the last several months. He was recently rewarded for this, with a major honor at the 2021 Jay Cutler Classic.

Things have been far from easy for Wheeler over the last two years or so. The four-time Arnold Classic champion has been dealing with a slew of health issues, that ultimately led to him needing to have his leg partially amputated.

In the face of this enormous setback, most people would find themselves depressed and mentally broken, but not Flex. While he has had moments of struggle, most of which he has been rather open and honest about, he has largely kept a positive mindset and kept working through the pain.

Flex Wheeler was recognized for these efforts at the 2020 Mr. Olympia, and now he has been awarded for his bravery yet again. This time, it came at the 2021 Jay Cutler Classic, which went down over the weekend in Las Vegas, Nevada.

At this show, Jay Cutler himself presented Flex with the “Axe Of Courage” during this event. The emotional moment was seen all over Flex’s face, with a video that was captured of the ceremony, which he posted to Instagram.

“(Wheeler) was someone that was taking over the pro scene by storm. He was such a huge inspiration in bodybuilding,” Cutler said.

“We all look up to certain people in our careers, it’s the ideal body that graces us in this sport… We called him the Sultan of Symmetry. He was what we called the greatest physique of all time.”

It goes without saying that receiving this award meant a lot to him. Even days after it has passed, Wheeler was still overwhelmed with emotions. A picture that he shared a couple of days earlier perfectly illustrates how much this made him emotional.

4× Mr”O” @[email protected] showing gratitude with the Axe of Courage!
Thank you to @jaycutlerdesertclassicfor letting flex Wheeler Signature Series & Back Widow be a part of such a great event and Congratulations to all the Winners of the show!”

It is evident that this award meant a lot to Flex Wheeler, as he was nearly brought to tears by the moment. The award recognizes athletes for their bravery in the face of struggle, and few embody that quite like he does.